Aaah, Prague…the capital of the Czech Republic, where the city and the river Vitava go hand in hand and are inseparable. And with a long history of brewing beer it is a well-known place by tourists. But I’m not running a city-trip review site or a cuisine-blog, am I? So moving the conversation on to Death Metal with introducing Snět, who have taken some Scandinavian to Czechia…(Ricardo)

Řád: Hail from the ancient Prague, here is Řád Zdechlin speaking. I’m a vocalist of the band and I came to the band in the last position. Guys were searching for someone who is quite insane in live shows and I’m also playing hardcore band Vole which is absolutely wild in live presence. We know each other for a few years so they ask me to join them. To be honest, I was a bit afraid I can’t sing good death vocals, but since I was young I tried to make noises like George “Corpsegrinder” Fisher so I had an idea. The main brains and guitarists are Ransolič and Hnisatel, they made it and they play or played few bands. Ransolič played with Morkhimmel, Black Aspirin and Slavery – all bands are from let’s say crusty/metal part of Czech scene and Hnisatel is playing in metal bands like Lezok (usbm kind of) and Bahratal, which you must check it out, they are thrashy black hardcore and they will release some material on Damien Rec. (USA) which would be first Czech band from our friend’s squad being releasing out of Europe. Other guys are Leproduktor our bass player from south Bohemia and Kruthorr the drummer from Nechyba (small village meaning of the name is No Mistake). South Bohemia is quite an epicenter of thrash metal and people are doing stuff in an old way. Lots of gigs and a lot of bands, for example, small fest Thrash Nightmare check it out. Leproduktor plays guitar in band Kaosquad which is grinding death metal in the best way and they are comparable to the world’s finest bands of that type. Kruthorr had many bands and he is very talented to play guitar, bass, or drums so we are super excited to have him in the band. From his past let’s remind Afterlife or the very old-school band Propaganda where he starts to play at his 9yo. We all know each other from punk and metal gigs so that is the story behind it.

Quite an introduction, you already mentioned Corpsegrinder, but which bands did influence you or got you into Death Metal in general?
Řád: To be honest, there are many bands that influence me and many other bands are influential to the rest of the band. From my perspective, I would say few bands I know in general dudes like the most and I will tell you what I feel about the band. We mention mostly Autopsy, Carcass, and from the new bands Undergang, Phrenelith. I guess there is quite a big halo about death metal or doom/death metal bands in general and you can see bands like Blood Incantation, Spectral Voice or Gatecreeper are very successful in the commercial world. We start the band in the time when the retro boom happening and I know it was no any calculation from us to play music which makes you successful, but I guess it makes us quite visible. Just know Ransolič‘s wet dream was playing death metal in past and I trust him. The band’s influence from my side are bands like Convulse, Sentenced, or Gorement in melodic parts, and let’s say contemporary bands like Vastum (vocals mostly) Mortiferum are very popular in our group. Unfortunately, I deleted your text about the artwork so I don’t know where it was. I and Hnisatel are the visual part of the band I do drawings and paintings and Hnisatel is doing a graphic job. You know we are quite excited about the look of old demos so we made something to remind it I prefer the Burning coffins cover with chains but both are drawn, post-produce in computer and xerox at ours friend Hrdla (Mhor band). For the new album I did painting and some drawings, we did a photo session and we are also preparing a video promoting our LP.

We have reviewed your demo “Promo 2019” (cassette released by Burning Coffin Records & Lycanthropic Chants) and were quite positive about it. Can you tell us more about the demo itself? Also congrats with the news that your new album will be released by Blood Harvest and Headsplit Records, can you tell us more about that as well?
Řád: We get all these labels, is because Ransolič and Hnisatel are doing gigs in our town and they know Steffan from Lycanthropic Chants because they did a gig for Cryptic brood. Burning Coffins, they ask us if he can make it in Chile which is amazing, and Blood Harvest, Headsplit they also ask for cooperation I guess. Maybe I’m wrong because communication with labels is not my part of the band. Shit.

Ransolič: I contacted Blood Harvest and Headsplit myself, because we like these labels and we thought they might be interested to work with us, which they eventualy realy did. Our recording was a quite long time ago, but I can tell you about our recording of the new album “Mokvání v okovech” which was recorded in the same studio (Dodsmord) like a promo. Our dude Anders Axelsson, yes he is Swedish, is a very nice dude and he helps and patient a lot about us and recording. He brings everyday beers from us even is corona time and we drink almost every day. is that funny? Yeah, so I’m happy we can announce a new album which will be released via Blood Harvest on the vinyl and CD and by Lycanthropic Chants, Headsplit records on cassette. We are super happy about recording and we hope you will like it like was over-hyped our promo.

About recording, it was quite basic, first drums, then guitars, bass, and vocals then solos and samples (intro and outro). The interesting thing is we use music from my friend Andrew (his band Whimm) from Toronto. He sent me some music he made for our R’n’B project and we use one of his tracks for our intro which I really like. The outro is made by Šaman who plays many bands mostly hardcore, more like ambient sound in the back.

It came to my understanding that the lyrics are important to you.
Řád: Yes, lyrics are important for me because I’m singing it and also writing it. Two songs are made by Hnisatel but mostly me. Songs are mostly about dreaming and nightmares. If you translate it you can have a clear view of my imagination of sexual, gore, horror dreams. Let’s say it’s a cliche eternal war with religion and we use it to but it makes sense to me, religion is quite part of many governments and it makes fucking slow progress or even down-grades to society, for example, are protests in Poland about abortion. We are not a political band, but we are part of society and we personally care about shit like the government is doing, it’s affecting our lives. So we fuck radical religions. So no political songs but absolute blasphemy to stupid rules. The rest of the songs are views to our lives I just rename our personal problems to more fantas-magory and horror topic. Mostly you can hear about the sense of life connected with ghouls eating your body.

Alright, that was the history and the present, what about the future?
Řád: Personally, I would be happy if we can tour a bit more than before, but Covid affects all world so it’s hard to plan something like a tour. I hope we would play Killtown, Obscene, Morbid Catacombs fest and we will see. I think before we release our new material we will make a few more songs because we got a little bit of progress after two years together. 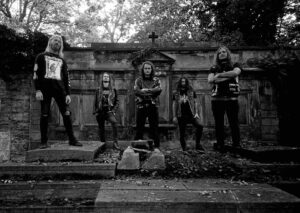 And now your personal playlist and band or album suggestions for our readers to check out.
Řád: Check bands, I mention in this interview there is a bunch of good Czech music from dungeon synth to grindcore. Check the band of Andrew pretty good proto-punk or post-punk you like. I’m looking at an interview of a dude from Worm band and I pretty like Thorns of the Carrion – The Scarlet Tapestry. Thanks, dude. Crux – Řev smrti is quite cool old school thrash/black from Czechia and also funny girl band Lochness and the song “Zduř, péro kuř” – which means “Hi, suck dick”. Some people maybe like to listen to Arakain song “Amadeus” a very cool thrash song and old songs from the band Kabát. For heavier listeners Clairvoyance from Poland or Oči Vlka from Czechia both on Caligari records. Also, check Gates of Londra with a friend from Vienna. He is extremely talented so check all his projects like Rosa Nebel, Parasite Dreams, and more. I’m really into Austrian scene like guys from Linz Death Racer (did cover for them), Hagzissa, Kringa, Brand, or more soft Concorde.

Before we wrap up this interview, do you have any final words or thoughts? Thanks for your time!
Řád: If you are singing drink red wine, if you not drink beer and shots! Smoke weed and fuck as much as you can. Support local scenes and go to live shows wherever you are!!!