“A cassette, unsophisticated Old School Death Metal, Finland…”…It was my opening phrase of the “Putrefied Icon” EP review. All the factors were present for a good listen and Gorekaust didn’t disappoint me for one bit. I’ve used references like Autopsy, Pungent Stench, old Amorphis and Abhorrence to describe the putridness that is Gorekaust. After a couple of spins I decided to contact Jami, the multi-instrumentalist of the band, wondering if he was interested to introduce Gorekaust to you all… (Ricardo)

Gorekaust was born in 2020 when me and my friend Samu, whom I had met in school a year prior, decided to form a band. We had numerous not-so-serious projects before but felt like it would be cool to form an actual band and make actual music for it. Soon after that we recruited a second guitarist, Matias, and started writing some material. Gorekaust was actually originally supposed to be a Bestial Black Metal/Grindcore band, but at some point we just decided to make straight-up Death Metal instead. That being said I still believe the Bestial/Grindcore influence is still present in our music, just not the main focus.

Although Gorekaust has been together for only about 2 years, we still have alot of great memories, mostly from playing gigs (except for our Helsinki Death Fest gig last year, we sucked there).

How did you get in contact with Death Metal? And considering the Finnish scene, which release(s) do you consider as essential?

I remember discovering Death Metal when I was like 13 and instantly fell in love with such bands as Morbid Angel, Death, Suffocation, Opeth and so on. I guess the thing that makes me love Death Metal as much as I do is the musical diversity of it and the fact that there’s not really a single “correct way” of playing Death Metal. Great Death Metal can be insanely technical, melodic and/or just otherwise “musically impressive”, but on the other hand it can also be none of the above and just full of caveman riffs and have a grim atmosphere and still be absolutely sick. So yeah, I guess that’s the thing I love about Death Metal.

The most important Finnish death metal albums/demos for me personally would definitely be Rippikoulu’s “Musta Seremonia”, Demigod’s “Unholy Domain” -demo, Demilich’s “Nesptihe” and the Abhorrence EP. Outside of Finland the best death metal albums for me would probably be Death’s “Symbolic”, Suffocation’s “Pierced from Within”, Morbid Angel’s “Domination”, and Opeth’s “Ghost Reveries” just to name a few. 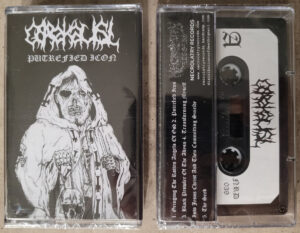 Lets talk about your latest and only release; the “Putrified Icon EP”…

We started the writing process for the “Putrefied Icon” EP almost immediately after the band was formed. The writing process was kind of a mess, as I’m pretty unstable on what I want when it comes to writing music. For example we had like 3 different versions of the song “Grinding the Rotten Angels of God” ’cause I was never fully satisfied with the song when we wrote it. The first version was a Bestial Black Metal song, the second version was basically slam and so on and so forth. At some point we just decided that we can’t go on and write the song all over again forever and decided to stick with the version you can find on the EP. Luckily in the end it turned out okay, but if the other guys had not said enough is enough we would probably still be writing the EP to this day.

The EP’s reception has been mostly positive. Biggest complaints we’ve had have definitely been about the horrible mixing which I do agree with. Fun fact; I actually mixed the album myself, which I probably shouldn’t have done.

Most of Gorekaust lyrics are about the usual stuff; death, gore, anti-christianity and so on. I’m the main “lyrics guy” of the band, although our former guitarist Matias did also write lyrics for “Black Prowler of the Abyss” and “Transforming Myself Into Jesus Christ…” on the EP. The lyrics are really just a by-product of the music, and most of them don’t really have a deeper meaning behind them. Though I’ve put some more thought into the lyrics for our upcoming album, they’re still not the main focus of the band by any means. The music comes first by a mile, so to speak.

At first you have released the EP on a digital platform only, after that Necrolatry Records released it on cassette. Is the format something special for you? And what about vinyl?
Even tho I’m not the biggest cassette enthusiast myself I still do greatly appreciate cassette as a format and the fact that Necrolatry Records did a cassette release of “Putrefied Icon” is a huge honour for me. I’m a vinyl guy myself and I’d love to get a vinyl release for Gorekaust sometime in the future, although they’re pretty hard to come by nowadays and doing a self-paid vinyl pressing is expensive as hell, so sadly it’s probably not in the cards for us right now. We also had some talks about a CD release for Putrefied Icon last year but they kinda fell apart.

Any news on new material?

Right now we’re recording our new album which we’re planning on releasing in early Fall of this year, and we’ve had some talks about a physical release with some labels/distros. I’m not sure if I can really go into detail here, but yeah, there have been talks.

The new stuff is pretty different compared to “Putrefied Icon”. The premise is the same but we’ve shifted more towards “actual” Death Metal compared to the EP’s Death/Bestial kind of sound, and we’ve also incorporated more melodic and kinda proggy elements on some of the new songs. Just to clarify, we’ve not wimped out and gone like full-out melodic Death Metal or anything. The new shit is as dark and as brutal as ever, but it just has more nuance than the EP’s material had.

You’re involved in Stahlhelm, a Black/Thrash act who released their debut album in 2020. Any news on them? Are you involved in any other bands or projects?

I actually left Stahlhelm recently, the band has been really inactive for the last year or so, so really nothing exciting on that front. As for other bands, I have a melodic hardcore/indie/whatever project with Gorekaust’s live drummer, Oskari, and a couple of other friends and we’re working on getting a demo out this year.

Are you involved in the music scene in any other way?
Otherwise than playing in Gorekaust, I’m also involved in the scene by occasionally taking photos of bands, you know like gig photos and promo pics and such. I’ve also created posters for underground gigs before and still do occasionally.

What is on your playlist lately? Also, any bands or projects from your neighbourhood you would like to mention?
Lately I’ve been listening to alot of Finnish hardcore and old school New York brutal Death Metal. If I had to name some of my favorites right now, I’d have to say “Tuli Kulje Kanssani” by Abduktio and the classic “Uskonto on Vaara” by Rattus from the Finnish hardcore stuff, and “Purging of Impurity” by Repudilation and “Psychopathic Embryotomy” by Afterbirth from the NYDM shit.

As for other newer bands from Finland worth mentioning, I’ll obviously have to namedrop our friends at Azatoth, Cryptic Hatred, Eradication of the Unworthy Infants, Exigenced and Connected. Be sure to check them out if you haven’t already, absolutely sick bands every single one of them!

Thank you for answering my questions. Feel free to mention anything I have forgotten to ask…
To all you who read this interview, be sure to check out the Putrefied Icon EP if you haven’t already and prepare for our upcoming album, it’ll be so fucking sick if I may say so. Thanks for the interview!