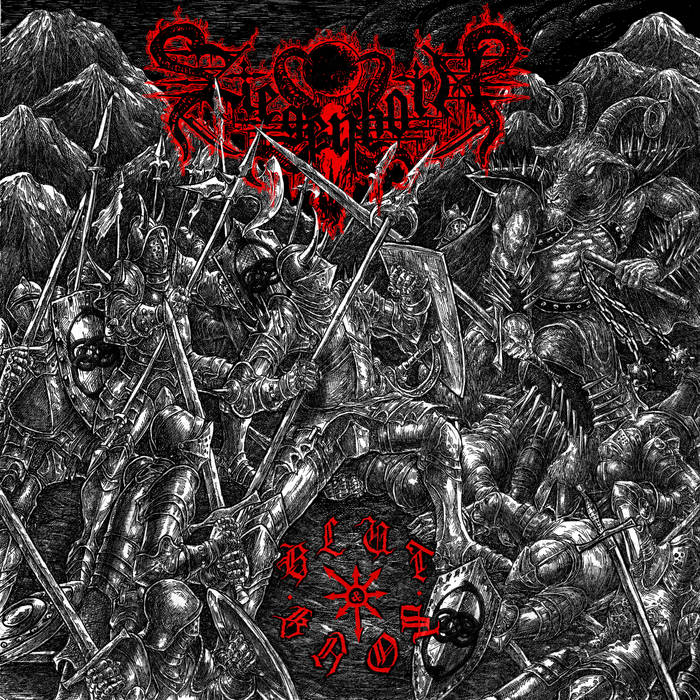 Following on from their impressive and goat heavy 2019 demo release, ‘Goat Demo(n)’, Estonian Death Metal band Ziegenhorn (German for Goat Horn) returned towards the end of 2022 with their debut full length album. Entitled ‘Blut&Kaos’, the album has been put out on CD by fellow Estonian Black and Death Metal label Warhorn Records.

Following a torturous intro in which various unknown souls are sacrificed to goats, the album gets under way properly with a grandiose, anticipation building drumming style, prominent bass play and slow, dark riffs. Despite its very short length, ‘Goat Mit Uns’ builds slowly and almost acts like a second intro track that leads into the bestial onslaught that is ‘Phantasm of the Goat Era’. I feel that the vocal work gets a little lost within the overall mix of this album, though the barked, almost anguished growls and grunts that emanate out from the almost impenetrable murk are very impressive in their heathen savagery.

Two of the tracks that featured on the bands debut demo also feature on the album, having been given a horrific make over. The first of these is the brutally swift riffs and punishing, belligerent drum tones of ‘Chant for Utopia’, whilst the other, ‘Goatblood Ritual’ features towards the end of the album.

On what has been up until this stage a very intensive bout of single minded brutality, the slower and deeply brooding intro to ‘Goatural Blasphemy’ is a welcome change of pace, though it does then lead to another savage dose of harrowing, cavernous aggression. And really that is the album in a nutshell. A ravenous marauding juggernaut of crushing proportions. An album with a furious bass undertone that destroys and dominates from start to finish. What it lacks in both subtlety and finesse it more than makes up for in spectacular ruthless aggression.