Imha Tarikat – Hearts Unchained – At War With A Passionless World 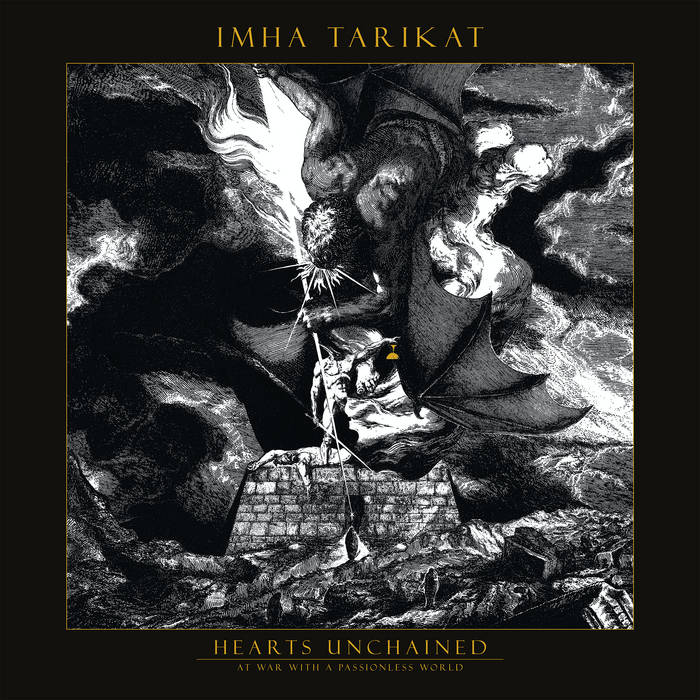 In the review for ‘Sternenberster’, the previous Imha Tarikat album, from 2020 I already explained that I had the feeling the band never really got the attention the band deserves. And despite the far above average quality Black Metal that the band offers, things seems to have hardly changed. But fortunately, that does not stop multi-instrumentalist and driving force Ruhsuz Cellât from coming up with another peerless album so near the end of 2022.

If you’d take the time to listen to the entire Imha Tarikat discography, from the very first, Terratur Possessions released ‘Kenoboros’ 12” EP from 2017 to his latest piece of work, you’ll hear a musician (and band) is going through an astonishing development. Not only his song writing skills have progressed impressively, but Cellât clearly has broken through various borders to let his creative skills flourish. The gruff sounding first recordings still bear a certain charm and it found its way to my record player quite regularly when it was released, but it also had a bit of a restrained sound that somehow felt like it didn’t reveal Cellât’s full potential. On all subsequent releases that self-controlled sound has increasingly been dropped in favour for more musical adventurism.

While ‘Sternenberster’ already was the band’s best showcase of contemporary Black Metal, this new album even further pushes the envelope. In fact, the title of this new record, ‘Hearts Unchained – At War With A Passionless World’, is the perfect summary of what you have to work through. Not at all an easy-listening piece of dark art, but then again, I guess none of Imha Tarikat’s previous releases were easy on the go snacks. It might require a certain perseverance and determination to fully wrap your head around it. And once you succeeded in doing that, this new album, just like the preceding album, unfolds like a passionate world. Besides the usual dark and rather twisted sort of riffs and those forceful driving drums, there are the non-musical shouts, rather than screams, of Cellât. Those vocals are part of the inaccessibility that the band might have prevented from getting into more widespread acclaim. Yet, it also offer some counterbalance to the otherwise so intricate and well-crafted Black Metal soundscape, giving it a certain rough edge, like an unpolished diamond.

Compared to the band’s preceding work, ‘Hearts Unchained – At War With A Passionless World’ does feature some beautiful, progressive, almost later Anathema-like melodies and lead guitar, giving the album an even more balanced and dynamic character. Some of the most enchanting, progressive melodies Cellât ever offered, like on ‘Touch Of Mercy’ are easily juxtaposed to relentless and fierce Black Metal tracks like ‘Stardust Wisdom (Manifest Of The Deity To The Unkeen)’, and embodies the greatness of Imha Tarikat.

Cutting a long story short: Imha Tarikat has delivered their best effort so far, blending all its trademark elements while even further pushing its contrasting beauty. Anyone who is willing to invest a little time and effort will be fully rewarded with one of the best Black Metal albums of 2022.