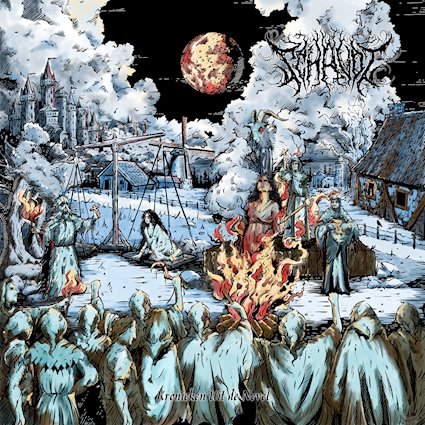 I’ve been looking forward to hearing the sophomoric full length release from Dutch Black Metal band Schavot for a while now, and one look at intricate artwork depicting a medieval witch burning and my anticipation levels have gone through the roof. ‘Kronieken Uit de Nevel’ translates from Dutch as ‘Chronicles from the Mist’ and will see the light of day towards the end of January 2023 on both CD and cassette through Void Wanderer Productions and War Productions.

This new opus feels like a continuation from the debut ‘Galgenbrok’ in many ways. Returning are the Symphonic Metal style undertones and the urgently barked vocal attacks, but for this new release Schavot’s bass heavy bombardment and savage drum tones are have been reigned in a little, and smoother sounding guitar melodies are more prevalent throughout. That isn’t to say that the signature Schavot sound has lost any of its vigour or edge, more than they have been polished a little.

For tracks such as ‘Geestenrijk’, (Spirit Realm) a far more intense harmony is conjured; using bleak sounding guitar leads and haunting synth, the tone of the album twists to take on a far more darkly mystical turn. Interestingly, there is also a departure in terms of vocal output as briefly a more spoken word narrative similar to what you might hear by Old Corpse Road makes it’s present known towards the end of the track.

More polishes and accomplished this new album may be compared to the first, but there are hints of the old ruthless aggression that the debut spewed forth in track such as the phenomenally blunt and punishing ‘Heksenwaan’, (Witch Delusion) and ‘Zwart water’ (Black Water) whilst ‘Hijs de zeilen’ (Hoist the Sails) has a far more flowing and softer groove to it that kept me in mind of some early 80’s Genesis tracks, crossed with hardened Black Metal of course.

In all areas this new album from Schavot is an improvement on the debut offering, and as that was also of a high standard then the accomplishment is truly impressive. I look forward to the next opus, to see if Schavot can make it a triumvirate of high quality Black Metal releases.