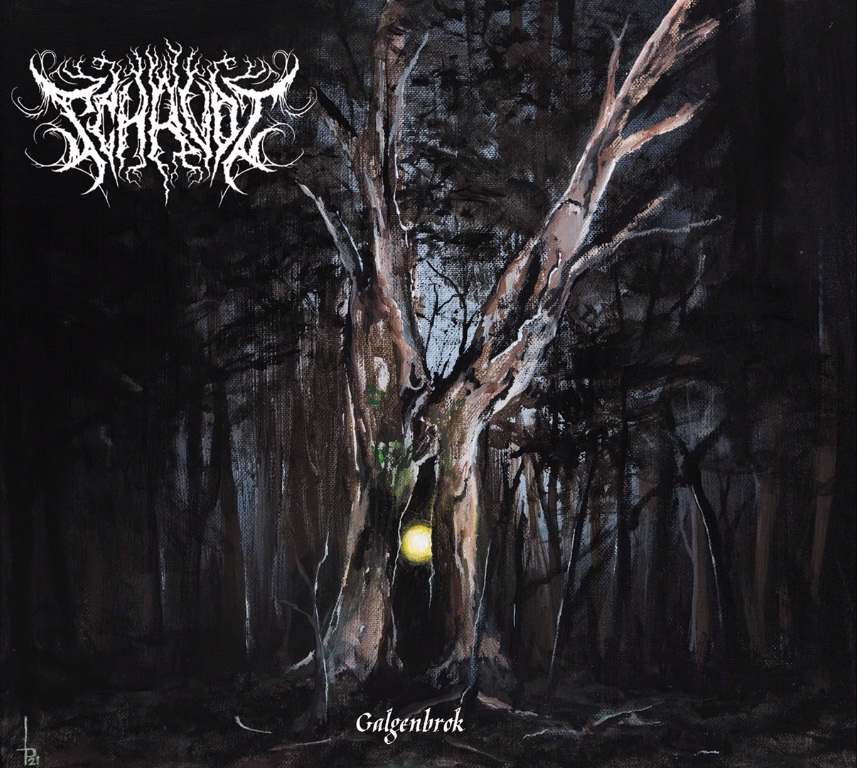 Back in September 2021, a dedicated Black Metal afficionado by the name of Floris from Limburg in The Netherlands put together a new one man project which he entitled Schavot, and wrote a debut album, which was then released through a label from his homeland, Void Wanderer Productions. He named said debut album ‘Galgenbrok’ which according to Google translates as something like gallows chunk, or lump, but which I assumed is meant to be gallows rock or hill. Having since asked the question of the man himself, it translates more as Gallows Villain and is from an older Dutch word. Artwork was designed with a dark and eerie visage that fits in well with the Schavot lyrical theme of Dutch folk tales, and eight tracks of absorbing Black Metal were created.

Opening track ‘Tussen muren’ (Between walls) with its fast and flowing rhythm, immensely catchy guitar melodies, sweeping synth undertones and furious bass and drum tones is the perfect way to the start an album; an easy alliance between delicate wandering harmonies and savage, unyielding aggression. I’m inclined to label Schavot as a Symphonic Black Metal project, but not in the way you may think. First and foremost, Schavot’s sound is clinically brutal, unerringly fast paced and hyper aggressive. The vocals for the most part are barked bouts of spite and vitriol, the bass play is very prominent and always powerful, the drum tones range from ruthless blast-beats to more measured but equally volatile beats, and the guitar leads are laced with ice and steel. Yet the melodic undertones are more akin to some European female Symphonic Metal acts such as Epica, Within Temptation or Sirenia, and this subtle and delicate sound is a complete contrast the usual Schavot style, but one that highlights the light and shade of this album magnificently.

With all of that being said, some tracks such as ‘Witte Juffer’ (White Damsel) are just short, sharp, shocks of electrifying raw power for the most part, until more haunting harmonies seep in towards the back end of the track. It isn’t until the far slower and more ominous bass drenched rhythm of ‘Helleveeg’ that the dust settles a little and a more calculating, brooding style can breathe a little before rising up and bursting out into another fit of frenetic drumming, ravenous vocals and riffs, and swirling melodies. And so the album continues in very much the same vein, with marauding visceral Black Metal heaviness and beautiful soaring harmonies. This is an album that bites hard but has a softer and charismatic charm.