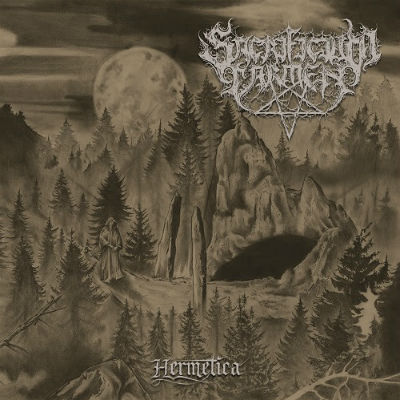 Let me start by offering an official mea culpa. This album should have been on my Top 50 of 2018 list. Specifically, “Hermetica” was probably my third favorite black metal release of last year, which would make it number seven at the lowest. Somehow, it got lost in the end-of-year shuffle. However, this admission speaks to the high quality of this release. The Finnish black metal scene receives a ton of well deserved press, including some from me. The scene is hellishly hot at the moment with each band egging the others on by writing exceptional sulphurous screeds of madness, leaving each to try to one-up the other. My current musical crush from Finland is definitely “Hermetica”.

Only the second full length release of the Finnish quintet, “Hermetica” shows a maturity and dominance that speaks to the real work the members of Sacrificium Carmen have put into their craft. There is much I could write about, but to me, it’s the layers of duality in the release that set it above the rest. The sections which show some melodicism are perfectly balanced with dissonance. There is a push-pull in the pacing which has all the power of the tides of the Baltic Sea. For every plaintive riff of tremolo beauty, there is a counterpoint savage slash of a riff, as if the track were knife fighting with a red hot blade. The material is dense with layers of drums, bass, guitars, demented raps, yet remains accessible. The accessibility gives a sense of simplicity, but your psyche will be lost in time should you attempt to follow every dark path found herein.

With remarkable savagery, Sacrificium Carmen present us with obliteration of the most visceral variety through “Hermetica”. I react physically to this album. I feel tense with my nerves on end as they put me through their paces of darkness. There is really nothing more I could ask for from this black metal masterpiece. A decade from now, this will be one of the established, must-have gems of extreme metal. Get it now. (Hayduke X)