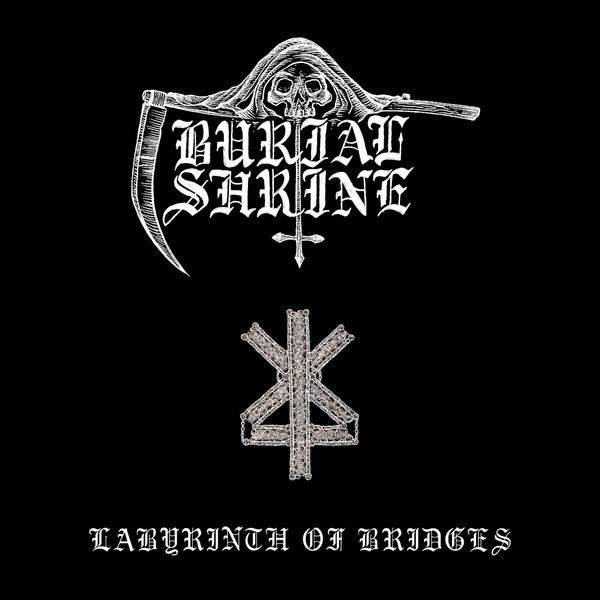 “Labyrinth of Bridges” is Burial Shrine’s first offering. Assembled in 2014, the band has been through a sort of long long composition process, with ups and downs, and only in 2018 their music saw the light of day…

One other Canadian band, but not one in line with Monarque or Fortresse, Burial Shrine is closer to the likes of Blasphemy and Conqueror, given the energy, power and full on rage they put into their music. Do not expect melodic and melancholic Black Metal lines, no! Do not expect atmospheric and almost depressive moments, no! whay you must expect in, as stated before: powerful and ravishing Black Metal from the lands of ice and snow!

It does not bring in anything new and no superb evolution in terms of Black Metal… but it does not need, for their line of Black Metal is exactly this: a total discharge of blasphemous power! It will appeal to all those that like their Black Metal on the aggressive side.. do not get me wrong, it does have melody, for it has moments in which the bands takes their foot off the pedal and swirl into more melodic waters.

These moments are the ones that I appreciate the most: the vocals go from basic guttural to more harsher and suffering growls. It does help with the overall atmosphere of the song, I assure you.

3 songs in, and it has not caught me by the neck, still… the 4th track has a very much more pleasant start: again, they went down the more melodic road! When doing this, their sounds gets much more pleasurable. But… there comes the storm ahahah the drums are not doing it for me. It is all very infused in violence that, as stated before, is a violent discharge of sound! Around the 4th minute the song gains a new momentum, calming, becoming heavier, more dense.

Burial Shrine’s Black Metal takes a bit of its sonic violence from Death Metal. No, let us not consider it a hybrid – commonly known as Behemoth – for it lives ,uch more within the realm of Black Metal, but its more violent and outbursting side, is more Death metal. their 7th and last song might be the one that appealed the more, to me. It has more layers to it, being more than just a total carnage, giving us a sort of breathing break, as it even introduces a small solo closer to the end of the song. It is a nice moment that, fear not, takes no power to the rest of the album!

Fast drums, piercing guitars, harsh and violent vocals… that is the sums of the parts, as Burial Shrine’s sound is concerned. Overall, it did not feel a connection to the music. Not that I do not like my Black metal with a bit of violent, but I was never into these more harsher, almost industrial sort of sounds… please, do not think of Ministry or any industrial band! Their music does not follow that path…

Global: if you appreciate a blow to the head while drinking your pint, than these is for you, mate! Roughly 40 minutes of violence. Do enjoy! (DanielP)