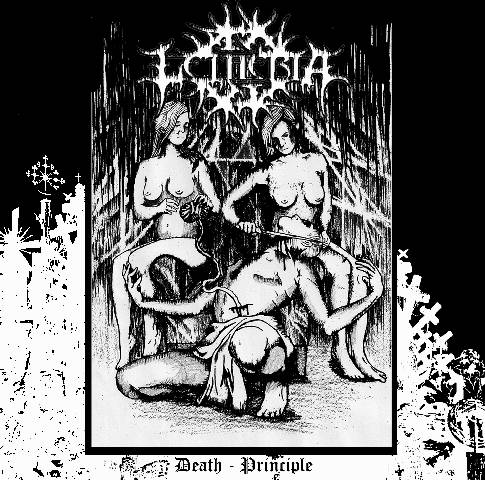 Finnish Black Metal band Letheria enjoys a cult status among metal fans. Unless you’ve stumbled across them by accident like I did, or know someone else who is already a fan, chances are you haven’t heard of them. Which is too bad because if you enjoy Finnish Black Metal then you will like this band and the great music that they make.

I reviewed their latest offering, 2018’s “Death-Principle”. Right away I knew I was going to enjoy the experience as the very first track, “Inverted Rapture,” began with medieval chants which led to some brutal guitar riffs. The song became even better as the vocals started; they had a dark and intriguing quality that caused me to focus even more. Everything about the song was nearly perfect. It was balanced and well-crafted all the way through. And it made me eager to hear all the other songs.

One word of warning; this is NOT an album to play for anyone who is sensitive about their faith or has issues with themes about rage and death. On the other hand, if you are trying to get someone to leave you alone this track might do the trick, “Swinelord of Devouring and Fucking”. The title alone shocked a few of my friends when I mentioned it to them; I can only imagine how they’d feel after hearing the song itself. The lyrics offer a dim view of humanity along with angry promises of retribution towards the world itself from beyond. It’s fast, too; over with before you even realize it. Despite its incredibly dour nature I really enjoyed this song, too.

I didn’t find a single song on the album that I disliked. All of them revealed how talented the band is as well as their understanding of the genre that they play. These guys don’t mess around. They are Black Metal and they could care less if you approve of them or not. In fact, they’d probably prefer that you didn’t care because you’re one of those horrible human beings that are too lowly to exist, let alone matter; this is Finnish Black Metal, after all, far harsher than Sparta could ever conceive of being. If you like your music fillled with venom, rage, sheer hatred and bit of Satan worship then you need this album for your collection. Now, if you’ll excuse me I’m going to listen to track six, “Death Hand Path” because it takes me to my happy place.  (LouiseB)