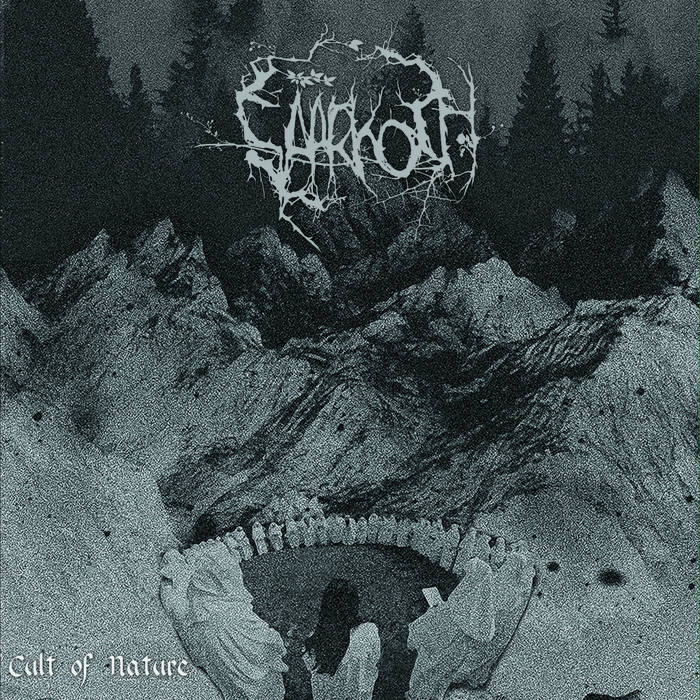 I am almost ashamed to admit, but I had not heard of Saarkoth before. However, this formation started more than five years ago (2016), being formed in the Staffordshire area (UK), initially as a trio. After a nameless demo, the band – back then still as a trio – recorded and independently released their debut Jera, and in early 2020 Saarkoth, now as duo since their bass player left, returned with a lengthy one-track hymn, called Follow The Cult (also without assistance of any label). At that moment, both remaining founding members Lewis Barker (guitars) and Ellis Arnot (vocals, strings and keyboards) did record some more material, which eventually made it to their second full-length album, Cult Of Nature. That stuff got recorded with mixing and mastering assistance of Mike ‘Leviathan’ Hardisty, whom you might know as well from e.g. Morte Lune or Written In Torment. Besides, Mike took care of the drum programming on this sophomore album.

The album, before I will go deeper into the aural aspect, was independently released via the contemporary digital sources, as well as on compact disc. The latter is a ‘normal’ jewel-case edition, which comes with an eight-page booklet. And apparently there does exist a tape-edition too, being distributed by the very young Birmingham-based cassette-only label Oak, Ash And Thorn Records. It clocks one hour (and a handful of seconds), divided into eight titles (having a running time in between five and ten minutes) and deals, once again, with subjects like, and now I will quote, ‘the relationship between Humanity and Nature, the rapid decaying of the Earth and the Human Mind’.

After several listens, I still get confronted with new and surprising elements and sublime yet carefully hidden details, so I did postpone this review a couple of times. You know, at the one hand, the result is quite complex – or at least enormously varying and adventurous. Yet at the same time, there surely is a sort of ‘tributing’ to the tradition of the scene, especially to the origins of the more atmospheric, epic and symphonic, even Post-oriented scene. In essence, the basic structure of each composition is sort of comparable in its huge variety: atmospheric passages get, often brutally, interrupted by malicious blasts, orchestral excerpts interact with no-nonsense eruptions, funereal moments and morbid decelerations go hand in hand (or is it: claw in claw) with thrashing or victorious fragments.

Indeed, the diversified song writing and performance are enormous and sort of characterising this album. They refer to bands like Emperor, Agalloch and Winterfylleth as being a huge influence, and that for sure does hit the figurative bull’s eye. But an important remark needs to be made. Saarkoth are not just a spin-off from any of those aforementioned (superb) bands, for they sort of create a very own, distinctive yet typifying approach. Also bands like Wolves In The Throne Room, Blood Of Kingu, Drudkh or Altar Of Plagues might come to mind, besides the subtle injection of elements from Funeral Doom, Blackgaze, Epic (Folk / Viking-oriented) Black and Blackened Death Metal into their self-faced Post / Melodic / Atmospheric Black Metal.

For some reason – and that’s truly ingenious – Saarkoth know how to create a fine equilibrium in between elements from the traditional school with rather modernistic, Post-like structures. The better part is constructed around tremolo / twin guitar-oriented melodies as spine, heavily assisted by both blackened screams (very rough-edged and raspy, and filled with anger and spite) and, even-though less represented, deep and low grunts / growls. But of undeniable importance is the whole rhythm section, for the bass and rhythm guitars and the (programmed) drums / percussions do carry the whole towards a high level of supreme elegance. This easily brings me to the quality of the recording sessions, for the production is majestic. At the one hand, the mix is top-notch. All ingredients, both the leading ones (as said, especially focused on the vocal parts and the guitar leads) as well as the supportive rhythm instrumentation (acoustic excerpts inclusive), are equally divided. It’s such pleasure to notice the well-executed bass lines or bravely-supportive drum patterns in well-deserved balanced finesse with, for example, an overwhelming leading riff or a colossal solo-lead part; take the final sequence of Praying To Man, for example, and you’ll understand. At the other hand, the effective sound too is of a high quality, which corresponds so intensively well with that professional mix / mastering of the album. The result sounds very decent, quite clean (I mean: no noise at the background) and pure, yet not too clinically chaste or maidenlike. No, there still is that necessary roughly-edged rawness going on, which strengthens the bleak, ominous immersion into this album’s concept.

There is a remarkable touch of ‘emotion’ going on, playing with attitudes like nostalgia, regret, perception, self-awareness and introspection, as well as disgust, hatred, torment, wrath and vengeance. Do not expect that these emotions are like fakely created and false senses, for the atmosphere on Cult Of Nature goes deeper into the relationship of the human kind with our diseased planet. This goes for both the aural part of the album, as well as the lyrical one; no pathetic melodies or patronizing texts, but in-depth sounds and messages in a consciously-messaging manner. (Ivan “Concreteweb” Tibos)