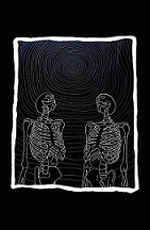 “Hertovenarij” is the work of two Dutch bands, both contributing one song to this split album. The artist of Reiziger, N, is currently also active in the band Laster where he does all instruments and vocals, just like in Reiziger. The song on this album “…en met de zon in ’t hart, omarm ik de nacht” (…and with the sun in my heart, I embrace the night), is characterized by fast drumming and droning guitars and synths, creating a cold and intensely occult atmosphere, the whole is completed by the high pitched screams. At the end of the track there is even a piece of spoken word led by a calm guitar. Completing the whole song as intensely occult, dark and atmospheric. Alruin is also created by one man, Aurora the man behind underground tape label The Throat, and member of numerous underground bands like Vreemdeling, Hidden Dagger and Folteraar. On “Hertovenarij” he creates the song “Galgenman” (gallowman), a much more doom influenced atmospheric song, the drums are much slower and the guitar is even slower and more repetitive. With his vocals in the background, mixed in with the instrumentals, it creates a dark and oppressive song equal to the one that came before it. These songs combined create a short split of just 15 and a half minutes but it is most certainly worth a watch. Released through Nebular Carcoma Records it’s only available on tape, limited to 100 pieces. So make sure you pick it up quick now the prices are still low. extremely recommended! (Svart)