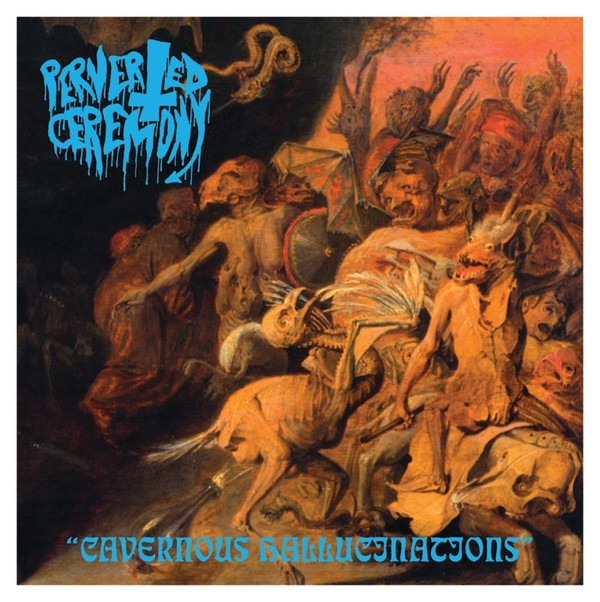 We at VM-Underground have given ourselves quite a bit of Belgian Black Metal to review over the past few months, not infrequently I have personally stood and marvelled at our southern neighbours’ amazing tranche of bands. The nice thing is that the Belgian Black Metal scene, actually much like the Dutch one, has a fairly wide range of different styles within Black Metal to offer. Most recently there were the impressive debut albums by Aerdryk and Oerheks, we see Belgium’s most revered underground labels Gramschap and Medieval Prophecy Productions putting out some great releases from their home turf and a band like Forbidden Temple still maintain a hefty work rate with their unique and high quality work. One of Belgium’s greatest Black Metal bands is Perverted Ceremony. This 7″ EP is actually already released last year, yet it is still definitely worth putting the spotlight on here.

Ever since the band’s first demo, ‘Sabbat Of Behezaël’, I was sold. The usually somewhat slower and bass-driven Black Metal with a clear predilection for bands like Beherit and Goatlord with a hint of Blasphemy here and there sounded extremely appealing to me. And given the large number of demo tapes printed and sold by Nuclear War Now! Productions axed and sold, I wasn’t the only one showing interest in the band. They continued their primordial sound on the full-length album with the same title as the demo, the self-titled 12″ and also on the split LP with Witchcraft. In fact, the sound on ‘Sabbat Of Behezaël’ turned out to be the bands’ blueprint and appears to be used over and over again, as this 2-track 7″ EP (which had also appeared as a promo tape a little earlier) also sounds exactly as you would expect. An organised chaos with blubbery, analogue sound and sloppy playing through which yet covertly an eerie-sounding melody creeps under your skin. With that, the title of this EP is also really very fitting; the term ‘cavernous’ is used all over the place these days, but in most cases has no value at all. What Perverted Ceremony shows here, I would indeed call that as ‘hallucinating’ and ‘cavernous’. The fact, however, that this sounds quite unsurprising is in no way a disqualification. On the contrary, I would almost say, this primitive and barbaric primal sound is something only to be cherished!  (FelixS)