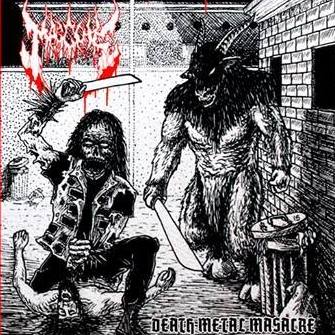 I’m more than excited every time that an album by an underground Death Metal band is released and it is more special when such release is by a Mexican band. Maggots is relatively a new band, they were formed in 2004 and this is their second full length, honestly this is the first time I heard about them and what a killer surprise was to discover this Mexican Maggots!

“Death Metal Masacre” is the name of the album which is full of powerful Death Metal. I like the intense style of this band that has reunited the best of their influences and the result was really fantastic, the riffs keep the same level all the time and the intensity never ceases. I guess that is the key of their style; some blasting moments here and there with a vibe of raw metal, like the Swedish and American bands from early 90s. Other important point to analyse is the intense speed this band plays with, most of the time they are fast and precise, believe me the killer riffing and the ultra-fast rhythm will destroy your ears, the way Maggots executes Death Metal is similar to a powerful drill.

This is a three piece act so there’s a bigger challenge when playing but not when creating, every instrument destroys at the same level: The guitar all the time crushing with chaotic riffs, drums all the time with crushing beats and bass guitar is highlighting with power when necessary, don’t forget the growling vocals, like an special touch. As I said before, their style is basically Death Metal but after the second listening I discovered that there’s some technical parts and the rhythm changes are more than interesting, that’s why this band is not boring.

I liked this album a lot but there are a couple of complaints that I would like to say: The absence of guitar solos in all the songs, featuring solos would have made of this album a jewel. All of the songs were sung in Spanish, that’s still something I can’t stand. (Homer Nava)