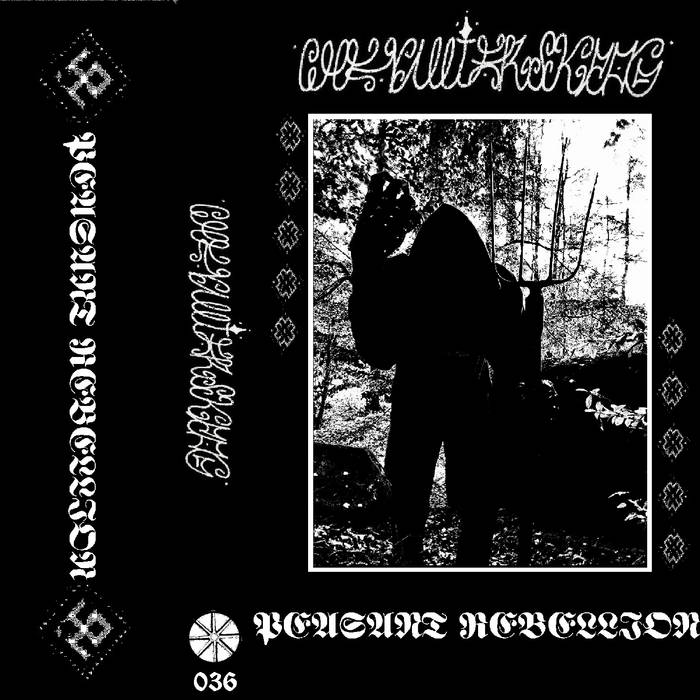 With this second full-length album, the ever-active Chevallier Skrog delivers its sixth achievement of this year. Where many one-person acts from the same Lo-Fi Black Metal corner that keep up an equivalent work rate eventually fall through when it comes to the quality delivered, this is absolutely not the case with this MBN-driven act. Although we can barely keep up with the pace, we can plunge into another half-hour of Lo-Fi Punk-driven Black Metal with full joy.

Compared to the previous recordings, we actually hear little new on ‘Peasant Rebellion’; there is no earth-shattering musical shift whatsoever. Still the Ildjarnian Black Metal is the basis, the unsettling buzzing guitar, the bass guitar roaring freely in the foreground, the simplistic drums and the icy screams: it’s all still there. So what is it that makes Chevallier Skrog so intriguing? Of course, that’s always a somewhat tricky question, as it’s often a matter of taste, but in this case it’s the atmosphere combined with MBN’s primitive musical approach. This take on the Black Metal genre is still a musical style not played by countless bands. It has nothing to do with mainstream second wave Black Metal, it stems more from primitive Punk and a penchant for analogue, Lo-Fi recordings with audible plugging in and out of instruments and incidental guitar feedback. It appeals to the imagination of any fan of pure and energetic music coming out of garages or dank basements. This is not about well-thought-out musical compositions with nicely polished pro-tools recordings, but even more so about spontaneity and powerful energy. It is that atmosphere and feeling that MBN has managed to capture again for this Chevallier Skrog album. Perhaps not unique in that approach, as certainly in recent years like-minded bands/acts seem more on the rise again, but certainly unique in result.

That this music has appeal is again evidenced by the fact that the tapes, issued by MBN’s own Pant Y Meddygon label, sold out in no time. While, on the day this tape became available, I was busy giving words to all sorts of other obscure underground gems for your reading pleasure, I missed out on them myself. For enthusiasts, ‘Peasant Rebellion’ should still become available through a few select distros and a vinyl version will be released later on. Until then, we will have to manage with the digital streams for a while. At least, until the next Chevallier Skrog release, which, estimating MBN’s work ethic, I’m sure won’t be long in coming.