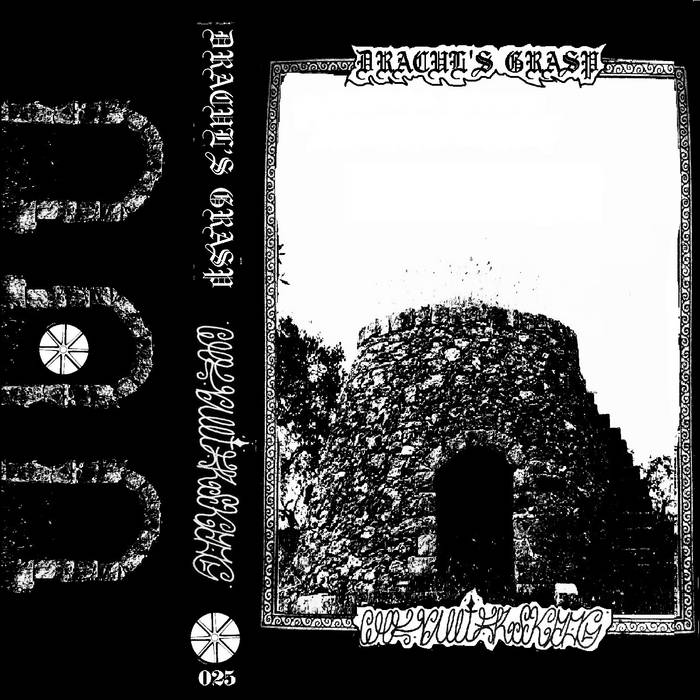 The fairly large flow of releases indicates the healthy work ethics of the Czech/Swedish Chevallier Skrog. We have covered this intriguing one-man act before on our pages and although this tape seems a little older than the featured ‘Dethrone De Imperial Bloodline’-album and that, like all other releases of Pant Y Meddygon, this split tape was released in a small number and is now sold out, but this split with the Canadian Dracul’s Grasp still deserves the attention.

Chevallier Skrog opens the split with a ten-minute-long track and returns with the same sound we heard on the acts’ other releases. Although it sounds a bit less gritty and rather shrill here, MBN’s signature is still recognisable. This long track also gives a bit more opportunity to play with dynamics and variety. The Lo-Fi/Raw Black Metal genre may not necessarily be the most adventurous Black Metal sub-genre, but it sees regular experiments with Punk influences and also Ambient/Dungeon Synth passages. MBN does not go in this direction, although a certain Punk vibe can always be discerned. Instead, this track, titled ‘Memory Stone’, gives the listener a breather in the form of some calm but ominous strumming. It not only gives the song some creative space, but also an extra distinctive character. Otherwise, all the trademark ingredients are present, the sandpaper sound, the rough guitars and MBN’s icy screech. The variety, though, does make ‘Memory Stone’ one of the better Chevallier Skrog songs so far.

The other half of this split release is reserved for the Canadian one-man act, Dracul’s Grasp, which released the ‘Thy Eternal Labyrinth’ demo earlier this year. The Raw Black Metal brought by Darghul, the man behind Dracul’s Grasp, has a certain Punk vibe and also lends itself well to a comparison with the French bands from the infamous Les Légiones Noires. With Vlad Tepes to be a bit more precise. Compared to Chevallier Skrog, Dracul’s Grasp sounds a bit more riff-based and sounds a little less dense and stuffy. The evoked atmosphere is also of a slightly different order, the tempo is on the fast side, but does diminish at times to leave room for some lingering and slightly melodic riffs that reminds of Swedish Black Metal. All in all, Darghul presents three interesting songs here that certainly spark interest in future work. Whether he soon will actually find or take the time for this remains to be seen though, Dracul’s Grasp is just one out of Darghul’s 20+ active bands and projects.