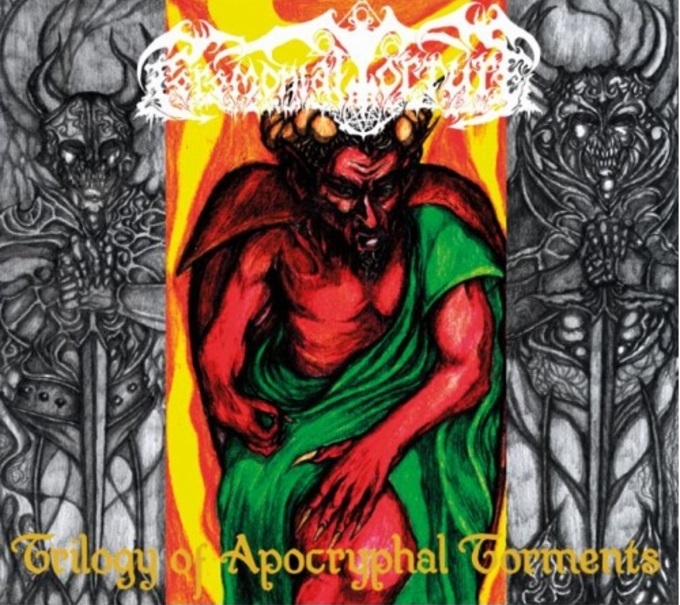 Ceremonial Torture is a rather obscure one-man Black Metal act from Finland which had its work released by labels such as Final Agony Records, Out Of The Dungeon (also responsible for the release of this compilation), Bestial Burst as well as Iron Bonehead Productions, who recently issued the split 12” EP with the great Greek Cult Of Eibon. The sinister figure behind Ceremonial Torture, Goatprayer Doom Predictor, is perhaps best known for his work with one of Finland’s greatest underground bands Witchcraft, but has a slew of other bands and projects as well, making him equally enigmatic as the music of Ceremonial Torture.

Despite this compilation being named a ‘Trilogy’, it comprises of four previously recorded material. In chronological order we are presented with ‘Promo 2017’, ‘Demo 2014’, ‘Forbidden Obscurity’ and ‘Majestic Dragon Moon’ (both from 2016). When you listen to all these songs, which together account for over an hour of material by the way, you immediately notice that the music has the same atmosphere over all the years. Because the songs were written and recorded at different points in time, the quality of the recording differs (although they are mastered), but the feeling and ambiance are strikingly the same. Clearly based on the Black Metal of yesteryear with more than a single and obvious nod to bands like Barathrum, Varathron, Necromantia, Samael and Mortuary Drape.

The bass-heavy and minimalist approach where the atmosphere is further boosted by interesting synth work. The somewhat harsh near-grunt-like vocals drive the music further into such authentic territories that it is almost indistinguishable from Black Metal that came straight out of those late 80’s or very early 90’s. That enchanting atmosphere is definitely the strength of Ceremonial Torture and is absolute fodder for those who are well into occult and necromantical Black Metal in its most primal form.

Out of the Dungeon