Two idiots walk into a bar. One says “ouch”, the other orders a drink. You decide which one had the long face right here as the mighty Ricardo and the somewhat less mighty Great Mackintosh take on an interview with Texan based band, or as The Great Mackintosh refers to them, monstrosity, Cemetarian. Best buy a couple of drinks, because they make some heavy, heavy shit. (Ricardo & The Great Mackintosh)

Ricardo: Let us just begin with your influences and the start of Cemetarian…
Band is only a few months into its existence. Matt and I have a project called Thy Feeble Saviour and we decided to start writing some more death metal style material one day. I wrote riffs for two songs and we liked how they turned out so I wrote 2 more. We’ve known Daniel for years and he was the obvious choice to ask to do vocals for us. Dave joined the band on bass for the 1 live show we’ve done and is now a full time member on guitar also. So the line up is Francisco-guitar, Matt-drums, Daniel-Vocals, Dave-guitar.

I grew up on this stuff during the late 80’s/early 90’s and when Matt mentioned about writing some death metal , I said fuck it, let’s do it. For Cemetarian, I’m influenced by demos and early ep’s by Cenotaph, shub niggurath, funebre, Putrifact, Grave/Putrefaction, Dead Infection, Crematory, etc. I’ve been into extreme music since I was a kid. Hearing stuff when it was fairly new was amazing. Still get the same feeling listening to that shit to this day.

Ricardo: You guys released one killer demo with “Tomb of Morbid Stench”! Can you tell us more about all the stuff going around the demo itself?
I will write riffs and show them to Matt. We get together and arrange them, usually rather quickly. We then show Daniel and Dave the songs and they add their touch to the songs. Dave will be helping write songs too in the future. We recorded it in our practice room. Our friend Brandon recorded us in there and did a great job. We recorded the drums first , then I recorded the guitar tracks and bass tracks that same day. Daniel recorded his vocals on a separate day with Brandon. We had our friend Carlos add some leads and noise to it and he did a bad ass job. So far, people seem to like it. If they don’t, oh well. Artwork is done by our vocalist Daniel. He does amazing work and has done art for many bands over the years.

The Great Mackintosh: Let’s us discuss those vocals. One of our writers got so lost in them that he imagined some sort of giant beast sitting in a stench filled graveyard belching it’s horror upon the world. First, how the bloody hell does one make such noises if one ISN’T some kind of monstrosity, and secondly, how does one train ones throat to make such noises. Is it a rigorous diet? Exercise? A touch of Possession maybe?
Don’t wanna give out Daniel’s secrets but when you hear Daniel , you know it’s him. He’s not one of the cookie cutter vocalist for all these current bands releasing shit that sound like they’re all sharing the same vocalist. Effects don’t make your shit heavy!!!

Ricardo: And what about the lyrics he is spewing?
Daniel writes all the lyrics. He basically writes about killing zine editors that are always asking all these fucking questions!! He could answer this question better but he’s not here.
From now on The Great Mackintosh is the Chief-Editor… 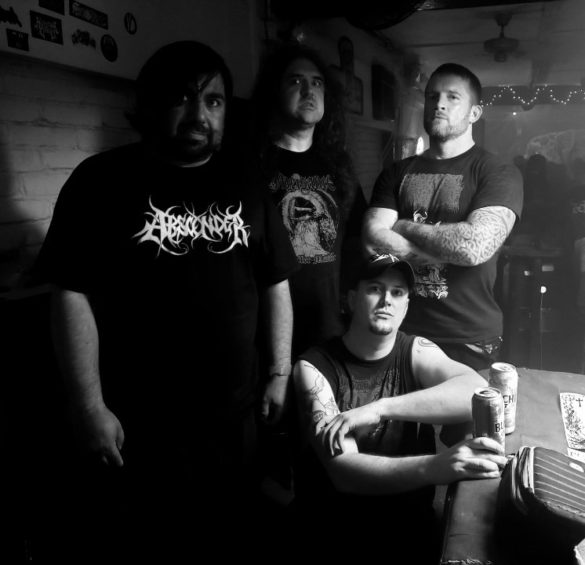 The Great Mackintosh: Comparisons to other bands, do you get them often, and how do you take them. As a huge fan of many a Death Metal, Doom Metal (and there I go subdividing everything) band, Yeah sure this is not unfamiliar territory, but that fucking voice, that atrocious gurgle seems to lift you to another level at least for me. The musicianship is spectacular to say the least, everything is covered, Does anyone say you sound like ‘so and so’, or do they just accept the pummeling as given.
People will always try to compare bands to other bands. We have gotten comparisons but it’s not always the same ones because we don’t just try to sound like a certain band or two, that’s weak! We put in lots of different influences into the songs from either the riffs, drumming, and arranging. We are all also influenced by old punk and hardcore so that comes out in the songs too, I think. We just try to make them memorable and catchy tunes. We definitely aren’t breaking new ground but we aren’t copying either. I definitely agree that Daniel’s vocals help set us apart from the pack.

Ricardo: How did you get in contact with your label Visions of a Crippled Mind Records?
They are friends from Texas that re-started a label and asked if they could help release the demo. Hi to Christian and Davey! There will be a European version released by Unholy Domain Records out of Italy on tape as well. Clandestine Productions out of Mexico will release the demo on CD with one bonus track included. Thanks to all these maniacs for their support!!

Ricardo: What are your expectations for Cemetarian in the future and do you already have any new songs written for a next release?
Continue to write shit to kill off all wimps!! Maybe play a show or two…We do have at this point have 5 new trax written, pretty much in the similar style.

The Great Mackintosh: What’s your general opinion on the music scene of late. Is it utter shite or is there hope for the future of all kinds of Metal?
I hadn’t really kept up with much until like a couple of years ago. There’s some stuff out there i’m digging but way more that I don’t give a fuck about.

The Great Mackintosh: Do you think that genre labels can put many people off from listening to some great tunes, and are people absolute knobs for just sticking to one kind of style?
I really don’t care…I’ve always done what I want.

The Great Mackintosh: Did you all grow up as tape traders and hate the digital age? Is Vinyl better than Cassette or CD? Is the internet a bastard of a thing that stops you from getting anywhere or is it a useful tool?
Yea we traded tapes but no way in hell would I sit down and tape anything for anyone anymore. too much work!! we were young then and had all kinds of time. haha. I’ve always been into vinyl and cassettes but lately I just mainly buy cds because I don’t really care about first presses, etc anymore. I just buy shit to listen to in my vehicle because I rarely have time to sit down and listen to my lps and tapes at home. the internet rules and sucks at the same time. I don’t have to wait a month for letters to show up anymore but it made everyone an expert on EVERYTHING!!

Ricardo: Are there any bands or albums of your recent playlist you would like to mention? A rediscovery, an overlooked gem or an unsigned demo band that deserves attention? Any other bands of your region of USA that are worth mentioning and to check out for our readers?
I really dig Absconder, Leprophiliac, Ruin, Cardiac Arrest. All those bands deserver your attention. There was band I stumbled upon called Burnt Decay recently that has a demo that I dug a bit. Really cool grinding stuff. Here in Houston area we have Blaspherian and Imprecation who have been killing wimps for many years!

The Great Mackintosh: You guys are not just in this band are you.. Care to share the rest with our readers?
We have several bands everyone should check out. Thy Feeble Saviour, Oath of Cruelty, Intolerable Noisechestra, PLF, H.R.A.

The Great Mackintosh: Hobbies. We all have them, or maybe you don’t, but I’m curious to know whether you count Flat Earth Theorist’s, Trains, or maybe keep a couple of Goldfish in a tank and find it rather soothing. What do you do to wind down after an evening of being you.
There’s this thing called sleep that I find very important these days.

Ricardo: Aaaah…..sleep. The older I get, the more I enjoy it. Before we wrap up this interview, do you have any final words or thoughts? Thanks for your time!
FUCK THE WEAK SHIT!!!