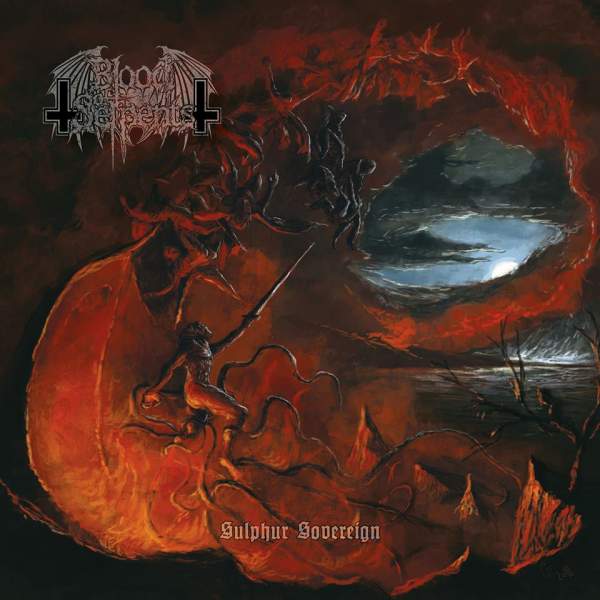 Sweden is full of dark, Black Metal bands which could fill up probably 2 or 3 countries up with the amount of high quality bands. A band which is new to me are Blood Of Serpents. These guys are around since 2012 and released quite a few outputs the last 6 years (2 Eps, 2 singles and 1 album) and they are now presenting their second full length “Sulphur Sovereign“. The great artwork was done by Khaos Diktator Design and represents the music in full splendour. The album has a powerful crushing sound thanks to Lars Broddesson and Magnus Andersson. And yes…parallels to Marduk can be thrown, due to its full front blasting attack the band is offering on their newest output. High speed black metal of the highest calibre.

The songs are captivating, aggressive and still have (for the most of the time) something recognizing and catchy to a certain extend which should appeal to lovers of Marduk, fast Belphegor, Funeral Mist and the likes. But when you think this is only going to be a straight blastfest, you are wrong. They throw in a slow motion meets blast banger in the middle of the album that is pure Black Metal greatness (maybe Dark Funeral-like). Afterwards even a sort of ritualistic song which mostly instrumental finds its place before the carnage continues. This is frostbitten Black Metal the way I like it. Like it fast but still with enough variation? Like it Black? Like it well produced? This might be for you. (DPF)