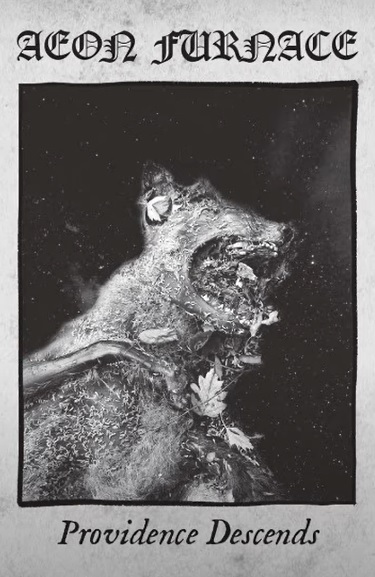 Out of nowhere comes Aeon Furnace, a Finnish four-piece that features members with illustrous pseudonyms like K.V.U. Mycophagous on bass, That Which Dwells in the Pit on guitars, drummer and vocalist The Third Deceiver (also a member of Scourge Lair) and guitar player L.S.A. Sagittariuz (otherwise known as Luxixul Sumoning Auter of Cosmic Church fame amongst others). Their first contribution to the Finnish Black Metal scene is the 2022 demo ‘Providence Descends’ released by Ancien Culte, and it’s one hell of a demo!

On their first demo the band pummels through five track spanning 18 minutes filled to the brim with primitive Finnish Black Metal. In some songs like ‘Eternal Hunt’ and ‘Katabasis’ the influence of Les Légions Noires inspired bands such as Warloghe is more obvious, at other times it’s more the primitive sound of say Azazel and especially ‘Beast Resonance’ has more of the Burzum-like sound of for instance Kêres to it. Most of the time the tracks rattle and rage on with the occasional room for a more grooving tempo, with The Third Deceiver barking his slightly throaty howls over the songs. Production-wise there is room for a solid bass sound on top of raw guitars, a touch of vocal reverb and snappy drums, while retaining the demo-like qualities that fit this type of raw Black Metal. And that is basic, to the point, violent Finnish Black Metal of the finest sort.

That the tape already sold out does not come as a surprise, since this is nothing short of a fantastic demo. Now let’s hope that someone will press this on vinyl, it would be an instant buy for me.