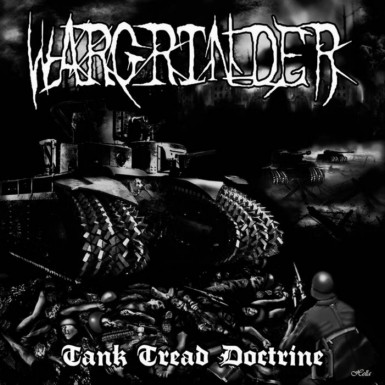 If you’ve done any digging in the underground over the last few years, chances are you’ve come across Greece’s Wargrinder. Wargrinder consists of one Terry War grinder AKA Warhead. A bit of a prodigy it seems in Greece, as not only is he one of the best metal guitarists and musicians, he is also known in the weightlifting scene. Terry is huge, like the Hulk huge. Maybe the muscle is why he can play a thousand miles per hour without skipping a beat. He is a beast that is for certain and as far as his guitar playing is concerned he is as fast as they come.

Having been unleashing hell since 1999, Warhead along with a couple members early on have 4 splits, 3 full length, a compilation of parents and a demo. I see War grinder lumped in with war metal bands, but to me they may have lots of War based thing themes going on, but this is utterly brutal as fuck death metal with serious Black Metal leanings. If I could mention a band that may pop up while listening to this, it would be Angel Corpse. To me, that’s a damn good thing. Consistently pushing the boundaries, it’s no surprise this is the most punishing and brutal release to date. The talent on display is second to none. Actual songs with riffs played more than once. Almost sometimes traditional writing in the sense of verses and choruses. All spewed forth with such seething hate I can imagine all his veins are about to pop while recording. If you want fast, hateful, war-themed brutal metal of Black Death, look no further. And as a side note, the Angel Corpse reference makes all the more sense as Terry Warhead was in Perdition Temple. Now off you go to check this fucking war machine out! (LOD666)