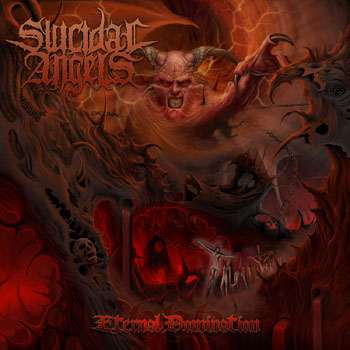 Suicidal Angels is as old school as can be, but on this “Eternal Damnation” they do it the right way. After several releases in the shape of demos, EP’s and an MCD this was the next step: a full length album, which should certainly be heard by Kreator-fans!

The sound of the album is old school, like a mix between “Pleasure To Kill” and “Darkness Descends”: indeed, Kreator is the main source of inpsiration, but don’t forget about Dark Angel and Slayer either… Especially the aggressive chords, combined with the aggressive and decisive vocals remind me very much of Mille Petrozza. Yet in contradiction to modern Kreator’s sometimes political lyrics Suicidal Angels does it the old way: demons, anti-Christian, blood and murder, the good stuff so to say. And to top it all, they have that same insane eighties guitar solos! Renewal (ironically enough a Kreeator song title) is out of the question for this Greek outfit, but if it comes down to conviction and the quality of the songs I have no doubts whatsoever about this band: this is old school the way it should be done!

The production is good for an old school band, yet for a modern album it would be perhaps a bit plain: well, it just adds to the authentic eighties thrash feeling. Live the band sounds much more massive, which I saw at the Dynamo in Eindhoven: Suicidal Angels opened for Onslaught, and they really impressed me over there. Regarding originality and modern feeling this is an album you can do without, but when you are an old school European thrash fan, this is one of the best albums I have heard in a while… Normally I would say that this band has the qualities to come up with some modern stuff that has more of an own face, but when done in this way I stick to ‘fuck the clichés, bring the noise’! (Neithan)