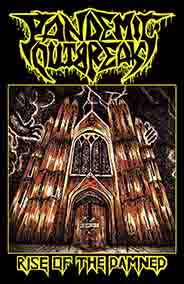 Once again a fairly new band which was formed to play some Old School Thrash. This time not the the Teutonic version of Thrash, but more the US kind so there is a bit more crossover in it. White sneakers & leather jackets all over the place. Although influenced by acts like Toxic Holocaust and Municipal Waste, Pandemic Outbreak rather rides the 3rd gear with an occasional shift to the 4th one, instead of having a brick on the gas pedal and playing on “are you mental?” speed. It doesn’t have to be a speedfest all the time (take a listen to some old Testament), but then you have create some kick ass songs. I think Pandemic Outbreak didn’t manage to create that. Also not a fan of the vocals, which sounds a bit to forced. After hearing the EP a couple of times, I can only conclude it doesn’t grab me. (Ricardo)