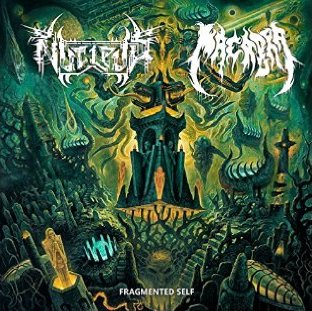 Dan Seagrave captured it perfectly. Both bands deliver a spacy, otherworldly death metal creating atmospheres from outer space, dark and obscure yet beautiful at the same time. Nucleus still have these twisted riffs, reminiscent of Morbid Angel with a Voivod-esque touch. Skills used and abused to create dark tunes and not boreness. Demilich also come to mind while listening to this spawn of black pitched metal de muerte. Norway`s Obliteration could be a good partner for an upcoming tour, sharing some similarities in chord progression and song structures. Watch out for these guys. On the second half of this half hour space journey we got Macabra, with artist/illustrator Mark Riddick doing all instruments and Adrien Weber taking care of the vocal duties. Knowing the band since their debut demo they managed to grow from release to release with their own mixture of doom-laden, filthy death metal, using a wide range of influences/tones in their sound and reached their peak with their second album ‚Äě..to the Bone‚Äú which was released in 2016, making use of keyboard sound in a way Necrophagia does (horror sounds, great instrumental parts). Their contribution fits well to the split, going to similar directions in terms of filthiness and twisted riffing, being less catchy than on their latest full length and sadly not being able to hold the high level on every track on this split. Still good, but I know the can reach higher levels(as mentioned before). If you like twisted ugly death metal buy it immediately. (DPF)