Megaslaughter – Calls From the Beyond [Re-Release] 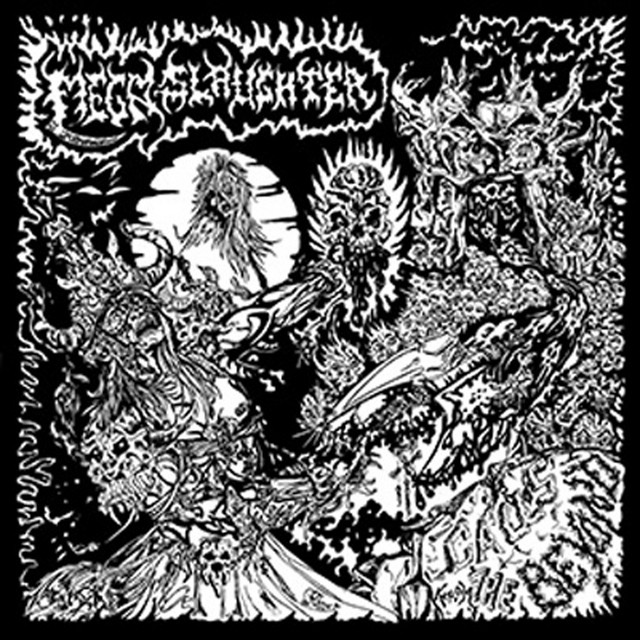 In the midst of the booming Swedish Death Metal scene, legends were born that colored the early days of the much beloved buzz-saw sound. With one release after another, bands sprouted from the underground, until at one point the genre became saturated, the overall quality dropped and only the flagbearers managed to keep their heads held up high. In such a violent wave of releases, many demos or debut albums that otherwise deserved to be heard were largely forgotten. In recent years, some of these underground releases have been unearthed by labels such as The Crypt, Vic Records and To The Death Records. The latter has re-released the material of the Gothenburg-based band Megaslaughter on several occasions, with the most recent re-releases in 2022.

The Megaslaughter debut album ‘Calls from the Beyond’ was originally released in 1991 on Thrash Records, a label that also released the debut albums by other Swedish bands such as Carbonized, Wombbath, Epitaph and Excruciate (as well as some classic Finnish Death Metal albums). It’s perhaps telling that most of those Swedish releases on the label can be considered cult classics at best (although the Wombbath is pretty sensational). Regardless, most of these bands do have that undeniable Swedish sound. But not Megaslaughter. Although… ‘Calls from the Beyond’ does have that typical thick Swedish buzz-saw production. And also the vocals are a bit like those of Matti Kärkki of Carnage/Dismember, but then mixed with a touch of David Vincent of Morbid Angel. Musically, the band continued the formula they had already taken on their demos: blending a little bit of Paradise Lost’s earliest material with a heavy dose of Obituary and Autopsy. Most of the material operates at a decent tempo, something the band has learned how to hadle much better than on their somewhat limited ‘Death Remains’ demo. And in that sense they do sound a bit Swedish: a buzz-saw guitar, heavy riffs with lots of pace and growls, mixed with the heavy riffage of Autopsy and Obituary and a bit of a Paradise Lost’ ‘Lost Paradise’ mood. What made those early Death Metal scenes great is that there was no template, that bands just did what felt good. And while not a classic by any means, ‘Calls from the Beyond’ does just that.

The band’s sound was different, and therefore possibly somewhat unique and underappreciated. Daniel Ekeroth called it a “confused blend of Cannibal Corpse and Metallica” in his ‘Swedish Death Metal’ book. Leaving aside the fact that that book is the only thing worth it that Ekeroth himself has ever produced, that observation is mostly confusing, besides one observation: the band does not sound very Swedish. But exactly that makes it an enjoyable listen. ‘Calls from the Beyond’ is an excellent record, a little bit different but nonetheless something you can thoroughly enjoy listening to if you like both the Swedish and American Death Metal scenes.