Kabexnuv – To Be Dead Amongst the Living [EP] 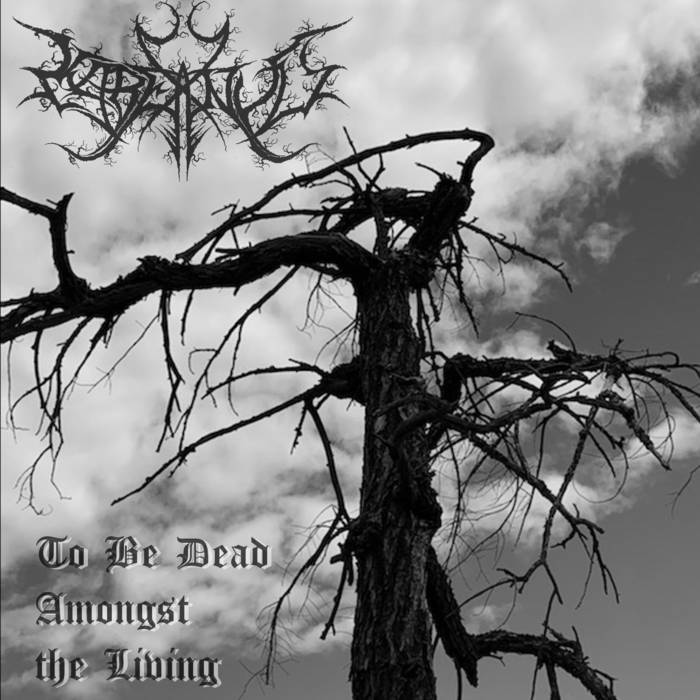 The ancient Egyptian god Horus had four sons, each of them with a relative important cultus to guide a deceased human being to his / her afterlife. All four of them were involved with mummification, preservation of dead people’s intestines after passing away, in order to guide those deceased people to the next step in life (even though it was not the trusted life-on-Earth thing). One of them was Kebehsenoef, Quebesenuf, Kkabesnouv, whatever how you want to write this name down in earthly scripture. Anyway, I am not going to write down an essay about mythology of ancient Egypt, but believe me if I say that this was an extremely interesting one – and for sure a complex one too.

Anyway, an open-minded musician from Canada I came in touch with a couple of years ago, does act under a couple of monikers. There is (or better: there was) Avitas, a somewhat War / Pagan oriented Black Metal act with a couple of mighty recordings (unfortunately this project was put on hold), and Myrtroen, the guy I am referring to, also collaborates in Stoner / Doom act Vulcanodon Phazer. But this very sympathetic human being also runs Kabexnuv, named after that son, one out of four, of Horus. It was the falcon-headed one, oriented to the west, preserving the intestines of a dead person in, well, ‘partnership’ with the goddess Serket. But as said: this is a review on a sonic release and not a summary of historical value (even though that mythology is one of the most intriguing ones, from that era).

Ergo: “To Be Dead Amongst The Living” is the newest Kabexnuv recording; a collection of three outlets of Thelemic grandeur. Apparently, this EP was recorded in just two days (in July 2020) at Myrtroen’s, eh, ‘legendary’ Odin’s Cave Studio (Kelowna, Canada). And once again it does deal with the (spi)ritual practices of occult-philosophical magic – the ‘Thelema’ sources are inseparably related to this project’s raison d’être. This is also where authors like Aleister Crowley take part of the feast…

Anyway, “To Be Dead Amongst The Living” -not exactly a happy thought (nor is the opposite)-, consists of three lengthy elegies, brought in all modesty by Myrtroen himself: song writing, production, guitars and basses, voices, synths, and lyrical re-arrangement. And before focusing on the performance qualities (damn, this sounds like an athletic report), a brief word on the sound quality. Well, let’s be honest: it sucks! Seriously, the production is far beneath acceptance, as if everything was recorded in some rusty container, or as if one single person tried to play all instruments at once. Normally I do not get irritated by a rough sound in this genre’s case. That’s exactly the same right here, right now. I can’t blame the roughness going on. But in all honesty, I think – no, I am sure – that just a small improvement could / can cause so much more. I am not going to focus on this fact any longer, but let’s conclude with: pay attention to the mix and production, and the result might be devastating!

Because, you know, the song writing and performance are somehow devastating. So, when forgetting about that (inferior unedited) production (I am sure Myrtroen did it on purpose), there is so much to discover (once again, evidently). This kind of blackened sonic nastiness is minimalistic and primal in execution, yet at the same time very rich and prolific. The basic structures are no-nonsense oriented, primordial and savage in essence, with necrotic and buzzing string-work, pounding, militant drum patterns and icy, gurgling, even wretched voices (quite unusual, yet strengthening the occult, ritualistic, mystic concept for sure!). That’s what the better part is all about. The whole is mainly mid-tempo when talking about the speed, yet more than once the whole adventure accelerated mercilessly, then again some excerpts slow down towards doomed proportions. That variety in tempo is a permanent given, executed with eye for detail in a very organic manner. Pushing chapters get interspersed with some hallucinogenic leads, down-tuned percussion fragments act like intoxicating mind-f*ckers, and weird breaks and hooks (note: not of the progressive or avantgarde kind at all!) twist and confuse. And then there are those totally weird, even frenzy and schizoid synth manipulations, purely lunatic, deeply berserk.

To Be Dead Amongst The Living lacks any experimentation, yet still the result is daring, even hazardous. As said, the three tracks are very lengthy (from almost eight minutes of length up to ten and a half minutes)