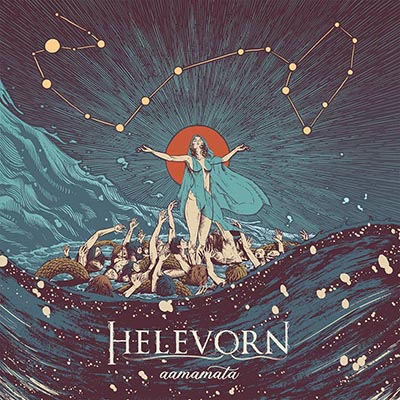 This time Helevorn does not come from The Silmarillion, but from Palma de Mallorca and brings stunning Doom/Gothic metal on its way! The band has been around since 1999 to deliver elegantly heavy and brutally melodic sound, newest of which is their fourth full-length album “Aamamata”.

Aamamata is the song Death sings every day in the Mediterranean sea, and so does this album. As the band stated, their goal is not to introduce something new composition-wise, but to use the good ’90-s sound to reflect on the modern world. Their motive are ill fates, pain and terror in the Mediterranean – interesting to see a band that doesn’t seek darkness in unreal, fantastic scenes, but in real and everyday life. I don’t find it inherently political, but truly painful.

Clean, noticeable production is there to highlight Helevorn’s down-to-earthly ceremonial dimesion crucial for this album. A variety of sounds resembling bands such as Draconian or Paradise Lost, on sung parts with a Vulture Industries feel – is all heavily tied to the concept. Each of the instruments had freedom to give a unique touch, which is also a big plus for Bad Mood Man/Solitude Productions who released this record. It also features many (and I mean – many) guest artists on vocals and various instruments.

Speaking of the guest artists, a song that really caught my attention conceptually was Nostrum Mare because it had so many languages: Greek, Catalan, Arabic, Italian, etc. – all those spoken among Mediterranean countries and territories (really, it’s like a Rotting Christ discography worth of languages but in 7.5 minutes, haha). Storytelling, completely in sync with adequate and diverse musical expression, is important for this album; vocals are relatively easy to understand and the atmosphere is fantastically fitting. It poetically yet without whiny affectiation naturalistically expresses songs of the unfortunate both in music and in words. Waves of anxiety, the process of dying, motivation in hardest of times, overthinking in solitude, decision to either carry on or self-destruct, and of course – love.

There is a saying that people are places and places are people – this sound is tied to the Mediterranean mindset and the record as such could not be made elsewhere. Undoubtedly, the scene is dominated by Scandinavian and American sound so an outlet like this is refreshing in a way the scene needs. Whether you take this as a historical tale, a political message or torment of unfortunate souls, embrace it whole – you will not be disappointed with sincerely negative energy coming from sorrows of the open sea. Helevorn know what they are doing. (Lana)