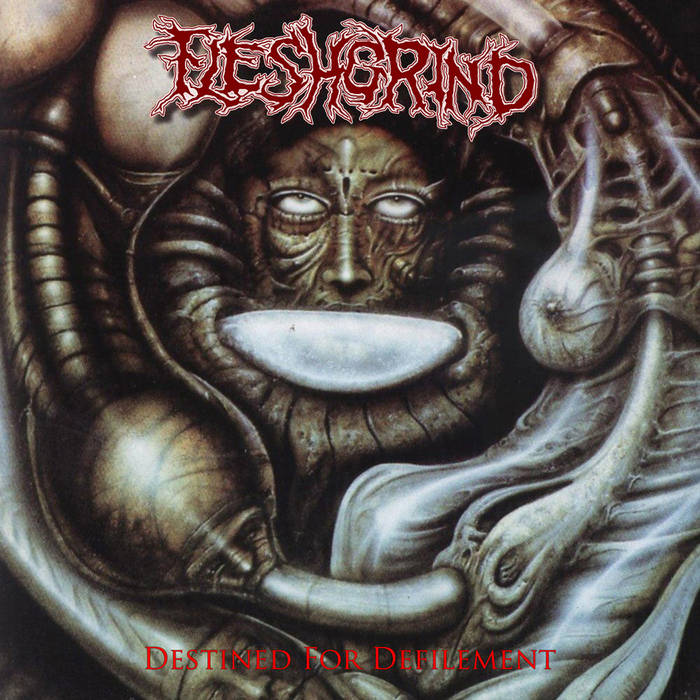 After the release of the demos compilation CD and cassette tape, both Burning Dogma Records and Corpse Gristle Records teamed up again for the reissue of Fleshgrind’s debut album, ‘Destined For Defilement’. The album was originally released in 1997 by Pulverized Records and several reissues already saw the light of day, including one on Fleshgrind’s guitarist/vocalist Rich Lipscomb’s own United Guttural label. But since it never saw a proper vinyl version before, as it was only released on a jacket-less picture disc by Perverted Taste in 2003, both labels now gave the album its full treatment on vinyl too.

The album is as much hated or ignored as it is loved. The common criticism on the album is that it lacks any real good song writing, groove or anything remotely memorable, while other love the machinelike precision that the music is executed with. And, honestly, there is truth in both of these bold statements. Indeed, ‘Destined For Defilement’ is not much of a genre classic, because it simply is not as good as the best of their genre contemporaries, it doesn’t sound as convincing as bands like Dying Fetus, Deeds Of Flesh, Gorgasm, Severe Torture or even Skinless. Yet, it wouldn’t do justice to completely discard Fleshgrind and this first album of theirs, it was indeed executed with enough precision and meaty riffs to give it more credits than it usually gets. In fact, its machinegun-like fire power has aged pretty well, unlike some of the other records that were released around the same time. the authentic old school sound definitely helped preserving the songs a lot better than the rather plastic and digital productions that started to invade the world of producers. Dying Fetus’ song material is way superior to anything Fleshgrind ever was able to pull off, but objectively listening back to those early Dying Fetus recordings makes it really hard to call that anything remotely heavy. Besides the more bona fide sound, I always appreciated the genuine enthusiasm that shined through this record. And, that ladies and gentlemen (and critics), seemingly is a golden recipe for letting something age nicely.