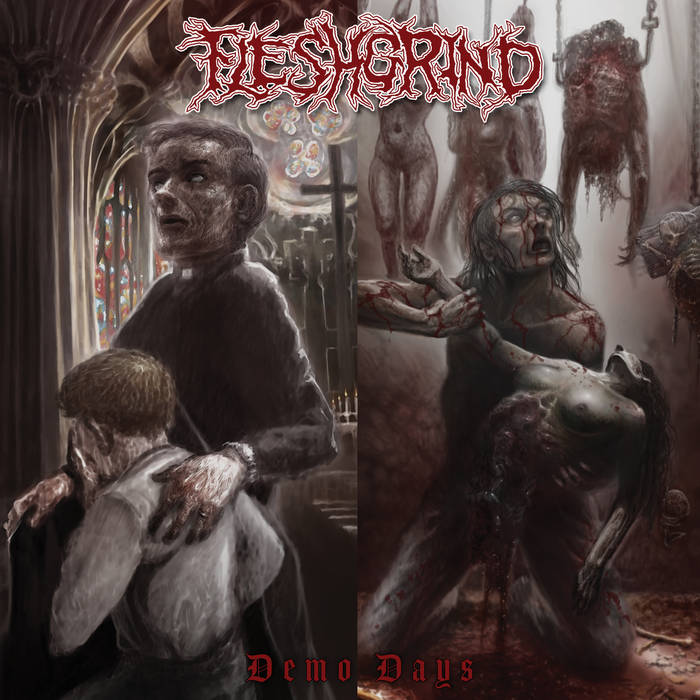 Before Fleshgrind became an established name in the Death Metal/Grindcore scene, the band released two demo tapes, ‘Holy Pedophile’ (1993) and ‘Sorrow Breeds Hatred… Bleed On Me’ (1995). It was these two demos that gave the band the kickstart to grow into a modest cult band in the genre. Although the band has not really had a clear ‘classic’ to its name, the band has always been a widely appreciated act in the Death Metal/Grindcore scene. Released by Burning Dogma Records and Corpse Gristle Records, this compilation CD contains both demos, giving a nice historical look at how Fleshgrind had its first steps into the world.

The demos are presented in chronological order, which means that first up is ‘Holy Pedophile’. On this 5-track demo we hear a band in formation, although Fleshgrind never had that much of a polished sound, like many other bands in the genre have adopted, on this demo Fleshgrind sounds a bit rougher than on their subsequent albums. The incredibly thick layer of riff-heavy Death Metal, in which even less room has been made for Grindcore elements, actually keeps itself musically most in the middle between Suffocation and Obituary. Enough technical ingenuity to sound interesting, but at the same time old school enough to keep both feet on the ground. The vocals of Rich Lipscomb, who sadly passed away in 2021, also sound unusually sharp and ferocious here, including some almost epic outbursts reminiscent of John Tardy, just listen to ‘Two Face’.

The second demo, ‘Sorrow Breeds Hatred… Bleed On Me’, is from two years later, but sounds remarkably less brutal than its predecessor. In terms of musical content, though, it is completely in line with that first recording, with again an emphasis on brutal Death Metal as it emerged in the mid-1990’s. Musical comparisons can also be drawn here to Suffocation, Cannibal Corpse, Broken Hope, Rottrevore and Deteriorot as well as scene contemporaries like Dying Fetus, Gorgasm and Deeds Of Flesh who took their first steps around the same time.

‘Demo Days’ is a fine historical document that not only showcases well the development of the band itself, but also the whole new musical movement that started along with a band like Fleshgrind. And the influence of those pioneering bands can still be felt in today’s extreme metal scene.