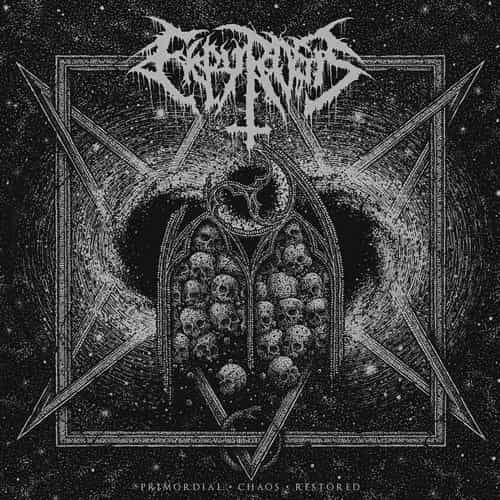 When you  are facing Ekpyrosis it is inevitable to think about Incantation, and this band does not intend to take distance from it because on this EP they include a cover of the legendary band of John McEntee. It does not matter if the riffs are accompanied with blast beats or if it is a dense part, EVERYTHING is designed to cause horror. An important part of the formula to achieve this decrepit Death Metal is the use of the dismal harmonisations in the guitars, that correctly conjugated give you the sensation of being part of a wake. And that’s what this little “sub-genre” within Death Metal appeals to everything that has to do with darkness, death and terror. The first two tracks of the “Primordial Chaos Restored” begin with this same formula of dense and decadent dead guitars. Another reference to understand this is Autopsy, who in the Doom Metal parts (in “Acts of the Unspeakable” for example) did a great job in the grim harmonization of both guitars. The double kick during the dense parts is another of the characteristics of this EP, a detail very appreciated by the followers of this style. Obviously all this must go well accompanied by voices from the depths of a sarcophagus. Ekpyrosis does not appeal to sound violence and it is not that they lack fast parts, but also that these parts sounds like dead. There is not a time when things stop stinking to death and it’s great.

The band included in this EP an instrumental track that really creates an atmosphere with an acoustic guitar background. This theme is not out of place, as it guides you more towards the meaning that the band seek to give and for you to check when reading the lyrics which are full of themes about cosmos, chaos, universe and doom. I think that until these words the reader can already have a good idea about Ekpyrosis. For the fans of Dead Congregation, Blood Incantation, Encoffination and, of course, Incantation, it is going to be a delicacy. (Mario)