Cultic – Of Fire and Sorcery 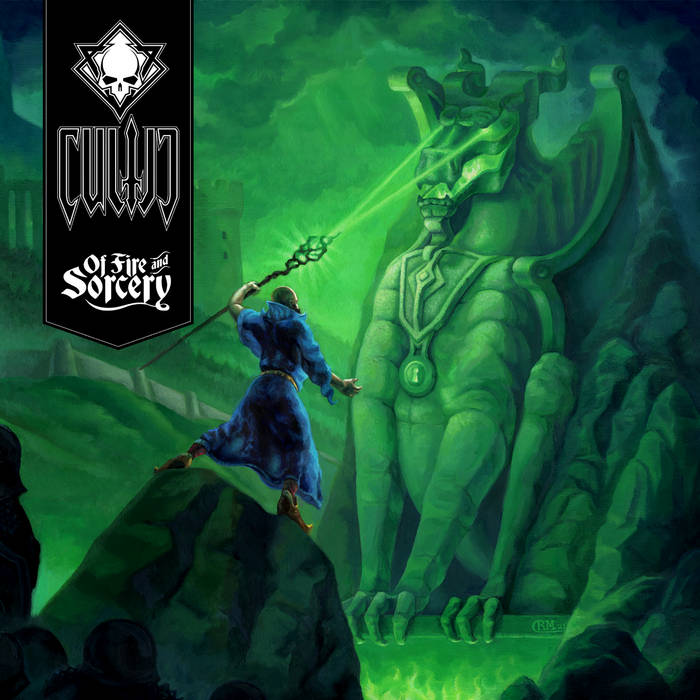 Dark Dungeon Metal from York in Pennsylvania is how this trio describe themselves. The band formed in 2017 and the core members are married couple Brian and Rebecca Magar. This year saw the band add Andrew Harris on bass duties to replace the outgoing Reese Harlacker. Another new chapter in the bands on going saga is the release of their sophomoric full length album. Entitled ‘Of Fire and Sorcery’ and released on CD through US label Eleventh Key, this opus is the follow up to the bands 2019 debut album ‘High Command’. (Released through the same label. As with their debut album, the artwork for this new release is extremely eye catching and so deserves special mention.

Intro track ‘Mystical Exultation’ sounds like the prelude to an 80’s fantasy film and quickly leads into the serpentine vocalled, deeply grooved tones of the album proper. Cultic sport a diaphragm rumbling bass heavy sound with dark almost whispered vocals, rhythmic guitar leads and a simple yet fitting drumming style. Not only that but there is a heavy Stoner Doom distorted vibe running through this album that meshes with the bands more Death/Doom orientated sound. With that being said though, Cultic are a band whose sound is very hard to pigeon hole as their style tends to swirl and invert and morph into something different at regular intervals. And then of course there is a deep veil of good old fashioned Dungeon Synth such as the short melodic and wandering interlude track ‘Weaver Deceiver’ which as it progresses takes on a more 80’s horror aspect.

Then there is the production to talk about, which while it isn’t full on lo-fi in sound, still has a darkened murky quality to it; with a slight muffled quality to the drums and gloomy aspect to the vocals in particular. And therein lies the real charm of this album. It screams out to be a Black Metal release, what with the Dungeon Synth elements and the production values; but this is pure Doom laden death Metal splendour with hypnotic synth undertones, interludes and harmonies. Very enjoyable, very grim and extremely twisted.