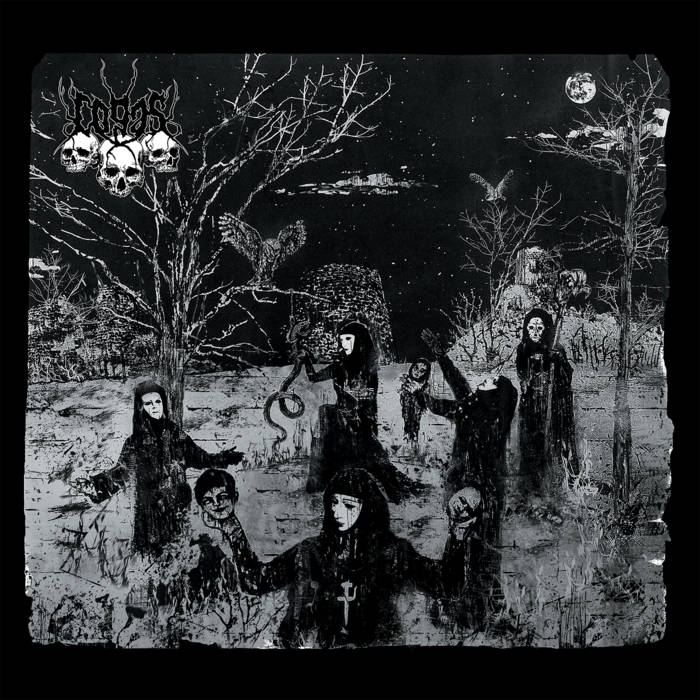 Following two impressive EP releases, UK based (And of Sardinian decent) Black/Death Metal band Cogas self released on CD their debut album entitled ‘Unconscious Sons of the Reptile God’, and since then a cassette release has followed, unleashed by the North East’s UKEM Records.

I’ve been listening to this album for the best part of 2022, and then I noticed it sitting in promos to review for this site. Well, not sure how I missed that but belatedly here are my thoughts on ‘Unconscious Sons of the Reptile God’. Firstly, this is a strong album, and that’s before remembering it’s also the bands first full length offering. The ghostly artwork that adorns this album only half-prepares you for the grim delights held within.

Opening track ‘The Mistress of the Damned’ is a catchy and melodic piece of work that often explodes spontaneously into bouts of hyper-aggressive guitar leads and blast beats. Just when you have Cogas pegged down, they hit you with some slower rhythms that sound foreboding and sinister. In contrast to the opener, the title track starts way more cautiously and showcases the bands softer, more subtle strokes before kicking into a grinding, intensive and bleak melody, filled with steely riffs and searing vocal work.

A particular favourite of mine is the rampaging beats and grinding guitar rhythms of ‘Sulfur’, which manages to maraud forward with catchy flowing riffs and brutal, Death Metal influenced heaviness. There is also a crushing intensity to this track that matches the darkness of the band’s lyrical output.

Overall, ‘Unconscious Sons of the Reptile God’ is a highly engaging album that at just over half an hour doesn’t out stay its welcome, and yet packs so much in. It is a dark, brooding album that utilizes the best of both Black and Death Metal, and manages to be both fiercely heavy and intensely melodic at the same time. I can’t recommend this album enough.