Morbus Grave – “When death metal bands came out in the 90’s, there was always some kind of magic” 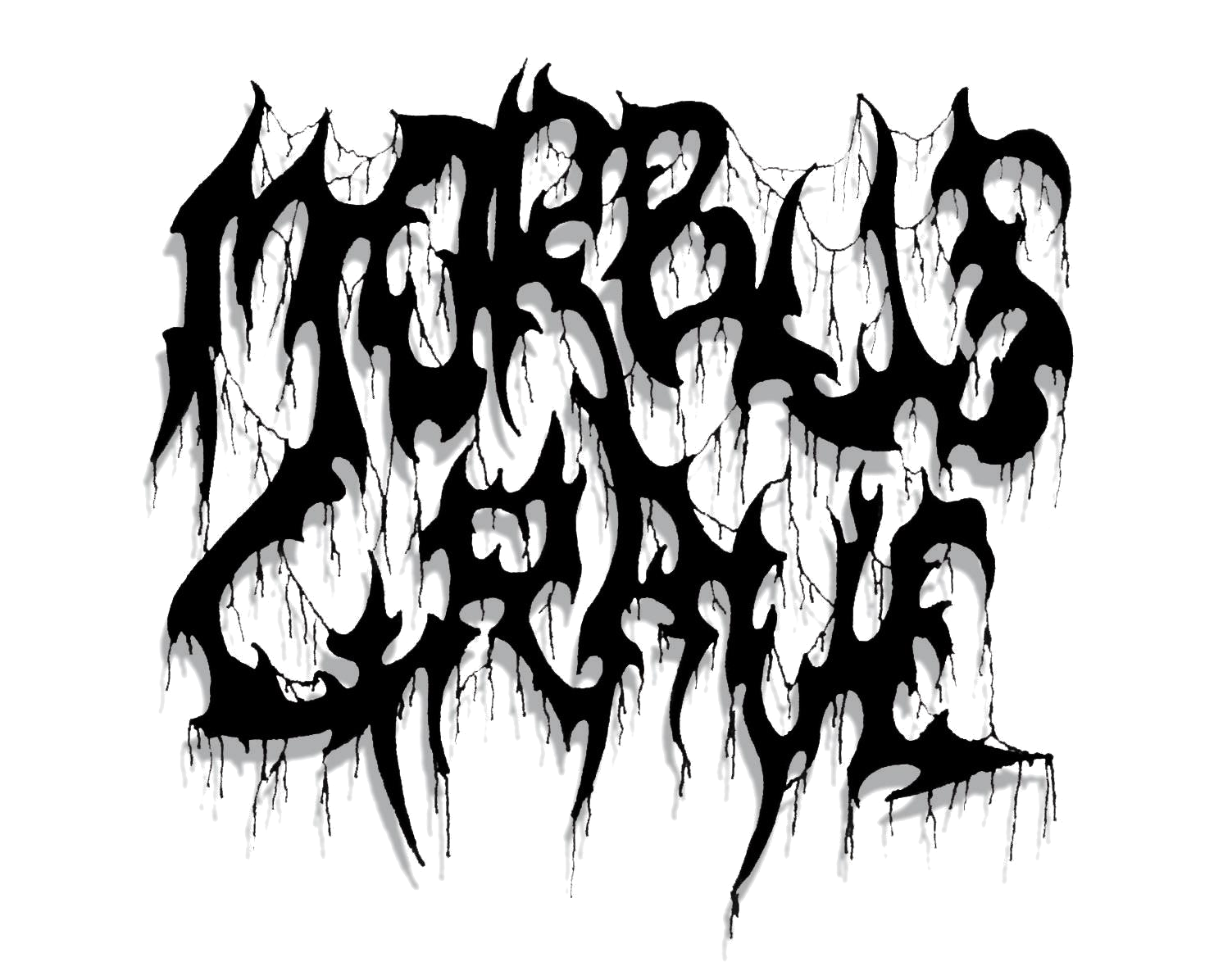 While the real boom of Old School Death Metal bands has passed and, with the knowledge of today, the peak of that revival does seem to have been in the years 2010-2013, all that remains now are bands that are serious about this primal form of Death Metal. One of the champions of the Italian Old School Death Metal scene is Morbus Grave, after a slew of demos they recently came up with their debut album ‘Lurking Into Absurdity’, released by the Mexican Chaos Records label. Enough reason to catch up with vocalist Erman…

Hi Erman, thanks for taking the time to answer some questions. I have recently reviewed your first album and the preceding promo tape. I loved your old school take on Death Metal. How did you get into this sort of music in the first place?
First of all, thanks to you for giving the attention to Morbus Grave. Well, I remember in 1988 to be in a local supermarket here in my country and I saw some Iron Maiden tapes. ‘Seventh Son of a Seventh Son’ was just released, and I bought it because I was particularly fascinated by the cover. But I didn’t like it right away, in fact I remember that only later maybe I was able to appreciate it. Let’s say that this was my first approach to this type of music… Later when I was at high school I had met some guys who followed the underground, we started intense tape trading… And remember being really excited to discover both death and black metal bands. There was some kind of magic in those bands… hheheheheeh.

What were the main reasons to start the band?

Well, when death metal bands came out in the 90’s, there was always some kind of magic… And we always had this passion for death metal. A.th (from Black Oath) and me started Morbus Grave because we want to play primitive and raw death metal. From the very beginning, A.th left the band, and I found other people to continue the path of the band itself. ‘Lurking into Absurdity’ was recorded, mixed and mastered in Macabro Bunker, with the following line-up: 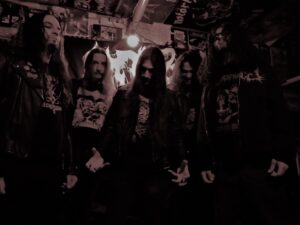 You have been releasing some demos over the past few years before recording your full-length album, how do you look back on those formative years?
I think that the band has followed its natural evolution..
Each release has been instrumental in the growth and development of the band and has defined their sound… Probably the promo and the full outline a much more mature and seasoned sound than the previous releases.

With only a few exceptions, most of your early recordings have been released on cassette tape. Is that a deliberate choice or was it just the way it turned out? Guessing from your Old School kind of Death Metal, it might be just the way you’d like to have your music out there..
After the recording of ‘Throne of Disgust’ the band never broke up but we had a dark period as the drummer at that time left us… When we found Danny as the new drummer we started to compose new material that we want to release as a demo… So it was like a natural thing to get the new stuff released as a tape.

Your debut-album, ‘Lurking Into Absurdity’, was recently released through Chaos Records from Mexico, how did you guys get in contact with them and how do you judge your cooperation thus far? Isn’t it a problem that the label, although releasing some good stuff, isn’t so widely spread in Europe?
Victor from Chaos Records contacted us already before the ‘Lurking into Absurdity’ album. The collaboration with him was born much earlier as he reissued the ‘Awakening of the Dead’ and ‘Throne of Disgust’ demos on CD. When we released the self produced promo as a tape in 2021, Victor asked us to make the album with him and we accepted his proposal. So far we can’t complain, at least the album has received good feedback, which we sincerely didn’t expect and we are very happy with that. Anyway, Morbus Grave has always been an underground band, if anyone is interested in the band’s music, also in Europe, he knows how to retrieve Chaos Records releases, so I’ve never seen that as a problem.

Listening to your first full-length, what do you think is the main difference when you compare it with your older recordings?
Surely the tracks of ‘Lurking into Absurdity’ are much more elaborate, more mature… Perhaps the initial releases were much rawer than what Morbus Grave is now. At the same time we must also consider that there have been several line-up changes in the band and this certainly led to leveling and forming the sound that the band has today, without ever losing the common thread for sure.

Remarkably enough this album was only released on CD format (and digitally), are there any plans for a release on cassette tape or maybe even on vinyl?
Yep, Chaos Records will release in 2023 on vinyl format too. And of course we have a deal with Burning Coffin Records from Chile, they will release the South American version of the tape. Unholy Domain Records from Italy will carry the European version of the tape.

What were the main inspirations for the album? Looking at the track titles and artwork it seems a bit of horror and gore themed, can you tell us something more about it?
At the very beginning the the idea was to make a demo, but the record was written during the lock down as we had a lot of material and we made it into an album. Yes, as you say there is a strong influence of horror and gore themes. But the concept of Morbus Grave has always been influenced by horror or by nightmares that can pervade each of us. We are talking about traumatic experiences or stories that have afflicted our human subconsciousness and that can be seen as recurring and indefinite dreams. Old movies that are a source of inspiration along with the dear old Lovecraft hehehehehe. 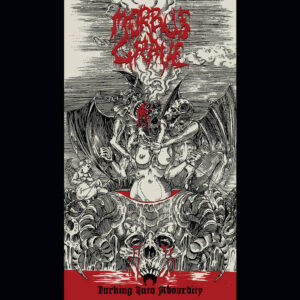 When looking at your personnel, I saw you are all very active in various other bands. Despite thinking I was pretty well introduced, I actually only know a few. Can you introduce some of your other work? Something we should really listen to?
Magiko plays in Extirpation and Black Oath too. Extirpation is a sort of black-thrash metal ban , especially their latest release is very cool and totally metal fuelled adrenaline. Danny plays in The Rite with Magiko too, they are working on the release of their new record that will probably be released in 2023 through Iron Bonehead. Me and Edison play in VomitVulva a band that is more into black/death stuff like Blasphemy/Sadomator/Beherit and Archgoat with war and sexual thematics.

How do you look upon your local (Death) Metal scene? Judging from your other musical activities I guess you are all very well connected. Are there any bands that you recommend for us to check out or maybe even should feature on our pages?
Yeahhhhhh… there are a lot of bands that we support and we are very close to. Some that we can mention would be Black Oath, Funest, Necromutilator, The Rite, VomitVulva, Extirpation, Into Darkness, Thulsa Doom… just to mention a few.

My favourite question of all is that little peak in your record collections, so see what kind of metalhead you are. Can you name us the records that were most influential for you as a musician and person? And what were the last records you bought?
Hellyeaaaarrrggggggggghhh… Yep, I’ve been buying records and tapes since years. Probably one of the most influential records is ‘Serpent Temptation’ from Incubus, Celtic Frost – ‘Morbid Tales/Emperor’s Return’ and Delirium – ‘Zzooouhh’. I lately have bought a lot of records for sure, but the bands that were really surprising and had a great impact on me are Mephitic Corpse, Necropsy Odor, Putridarium and Church Of Disgust.

Now you have recently released your first album, what will the future bring for Morbus Grave? Do you have any plans that you can already share with us?
Our biggest dream would be to go to play in some festival outside Italy, that’s our goal for 2023 at least let’s hope…. We cross our fingers. Meanwhile we are writing new material for a possible new release.

I’d like to thank you for your time, if you wish to add anything, the last words are yours…
Support the underground and stay death!!
In darkness.