Leprophiliac – “Let’s go back to rehearsal and basement recordings, fuck modern studios. And fuck greedy venues and big festivals too, let’s go back to play shows in squats and garages, cos’ there’s where this shit belongs”

If there was a prize for most sinister cover of the year, Leprophiliac’s “Necrosis” will definitely be nominated. At least as decaying as the corpse on the cover, is the Death Metal played by the duo from Spain. The tracks on “Necrosis” were colourfully described as “Take any track, turn it up so loud that your speakers begin to make the goldfish in your fish tank go cross eyed, and then turn it up until they also shit themselves.“, and that is enough for me to contact Dopi (guitars, bass, vocals) to have a little chat…(Ricardo)

Could you tell us more about the history of the band, how things started?

It started in 2019, I was jamming some covers with my old friend and drummer Suici, we had a good time so we decided to keep on going with the meetings, three months later we recorded a demo.

What inspired you to start a band in this style?

Early US Death Metal like DEATH, OBITUARY, AUTOPSY and Finnish demos like the ones by FUNEBRE or ABHORRENCE. We’ve been listening this genre since it started, as soon as we got “Scream Bloody Gore”, “Severed Survival” and “Altars Of Madness” we knew this is the music that better reflects us as individuals and here we are, more than 30 years later and still hooked on Death Metal.

There’s another CD release in Japan by Obliteration Recs, and the cassette release in USA with Sunken Tomb Recs was cancelled cos’ that label fuckin sucks and we got tired of delays and his rip-off fame everywhere, Headsplit Recs will release it instead.

I think is a great demo, very ugly and simple. We recorded it in our town at Treboada Studio with The Maggot, same guy and same place where I recorded with MACHETAZO and many other bands since 1998. The production is perfect, the artwork kicks ass and the reactions have been awesome everywhere. 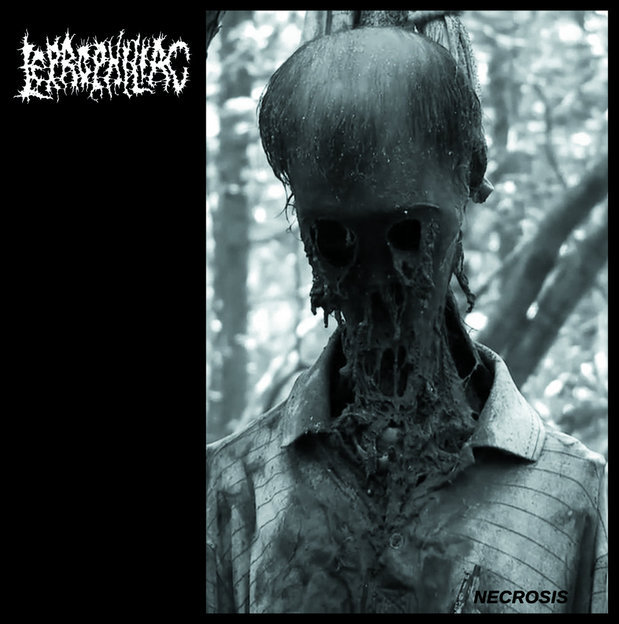 Guess what, there’s also another version! It’s been released on CD in Brazil by Cianeto Discos. And it will be co-released in LP by Rescued From Life Recs and Rotten Scum Recs.

The album was decomposed and processed in the same place as the demo, quickly and spontaneously, like a greasy and fast slab with a rotten steak. The cover artwork is a picture of a suicide in the Aokigahara forest in Japan, sick as fuck. There’s nothing funny about this release, it’s all about horror and destruction, it’s a great soundtrack for the forthcoming zombie apocalypse.

I write most of the lyrics, about horror movies and stupid morbid shit that comes to my delirious mind very often, nothing new under the sun. Suici wrote a few as well, always inspired by horror video games and anime, he knows a lot about that. Lyrics are very important, of course. There’s a message in this music to remind you about the dark side of life, and the inevitable triumph of death.

What are your expectations for Leprophiliac in the future? Have you already written any new songs?

We just expect to keep on going as long as we have fun, gotta be more fun than an open casket funeral, like ol’ ACCÜSED said so wisely.

Yea, we just recorded four new songs for a couple of splits with two Mexican bands, a 7” & tape with ROTTING GRAVE and a tape with CONCILIO CADAVÉRICO. They don’t differ at all, same morbid shit again. Also another two songs are composed and ready to record soon, for a split 7” with CADAVERIC INCUBATOR, same morbid shit too, of course. 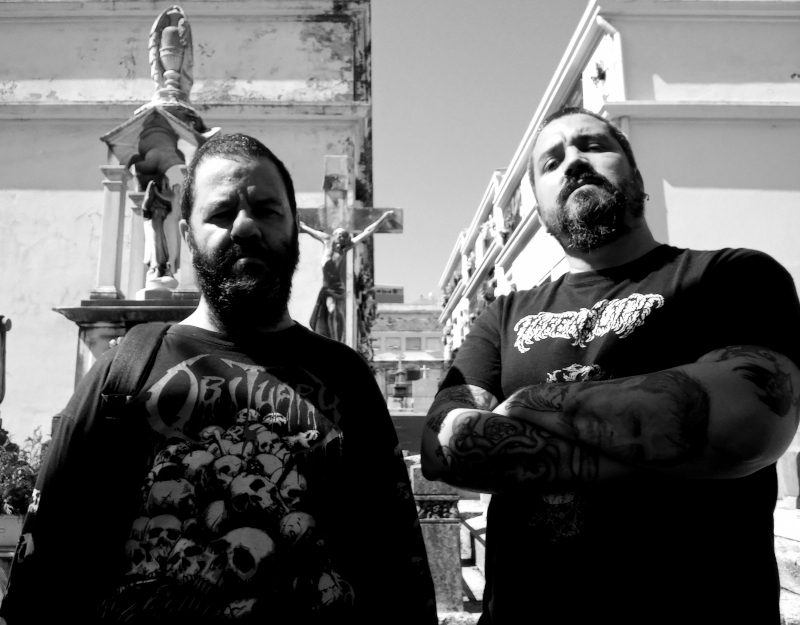 LITURGICAL DAMAGE and MUTILATED VETERANS are sporadic projects involving people from another towns, both are on hold right now.

I wrote for a few zines in the past, like Invocation Of Obscene Gods (USA) and Morbid Visions (Spa). Right now I collaborate with Necromaniac (Ger), and soon I’ll write also for the new issue of Scatology (Spa).

Are there any bands or albums of your recent playlist you would like to mention? A rediscovery, an overlooked gem or an unsigned demo band that deserves attention?
This year I got so many great Death Metal demos and albums that’s hard to make a list, I have a total addiction like if I was 15 again, it’s the only current scene that I really like.

In other fields, a great recent discovery I just got on vinyl is PETER FROHMADER’S NEKROPOLIS “Musik Aus Dem Schattenreich”, a recording from 1978, some of the most obscure music I heard ever, an insane a surreal voyage to the depths of the cemetery of your mind. Also I’ve been playing a lot first CANNIBAL CORPSE album, early MAYHEM, NURSE WITH WOUND “Soliloquy For Lilith”, KREATOR “Endless Pain” and SLAYER “Hell Awaits” (on double 12” 45rpm, sounds so good that’s hard to believe, pure perfection).

In Spain right now there’s a good and diverse amount of new bands, today I have in my mind and I recommend specially Death Metal like PROSCRITO or HORRIPILANT, and this new industrial act USELESS HEAD, their demo is fuckin’ killer!

Also do you have favourite labels you always keep an eye on when they announce a new release? Or a favourite illustrator / cover artist? Any favourite printed / online zines? A distro you order a lot from?
My fave labels are Extremely Rotten and Headsplit with all those fuckin’ amazing tapes they release, together with Dismal Fate NECROPHAGIA reissues, the weird roster of Backwoods Butcher, and of course some classic labels like Parasitic and Necroharmonic.

About illustration, I really like this dude Matt Plunkett (Rotting Earth), his style is totally gross and mysterious. The best zine right now is Necromaniac. I don’t order from distros very often, I usually trade, I like to get one copy for me and then a few more to sell among my contacts.

Before we wrap up this interview, do you have any final words or thoughts? Is there something I’ve forgotten to ask you which you would like to mention? Thanks for your time!
Let’s go back to rehearsal and basement recordings, fuck modern studios. And fuck greedy venues and big festivals too, let’s go back to play shows in squats and garages, cos’ there’s where this shit belongs. Back to zero motherfuckers, back to zero!

Thanks for the interview, stay and resist.