Horna – “To be honest, we don’t care if it brings our music to more people. If it happens so, then it happens on it’s own terms” 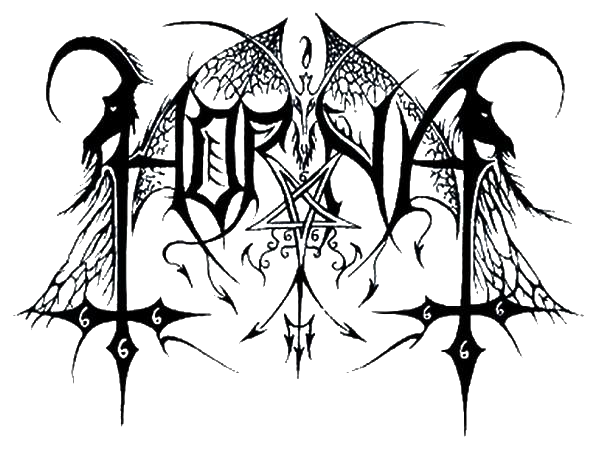 A band I’m sure need no introduction to you extreme metal hordes out there are Finnish masters Horna, darkening hearts for over 13 years with their unique and particularly ugly brand of unholy black metal. With an impressive back catalogue comprised of no less than 32 releases, Horna have managed to get creative once more with brand new album “Ääniä Yössä” just being released through Debemur Morti Productions. Based on the black death that swept over Europe during the mid-fourteenth century, the music on offer here is as dark and infectious as its concept suggests and maintains their status as kings of Finnish Filth. Read on to find out more…(DaveW)

Horna have been in existence now for an impressive 13 years. With so many releases under your belts and an impressive die hard fanbase, you must be impressed with what you have achieved as a band thus far in your careers. What in your eyes stands out as Horna’s most monumental moment in your long history together as a band?

I still think that moment was when we had our first album in hand. That was the only goal we ever set as a band and once it was achieved we have pretty much done what we wanted, when we wanted and how we wanted it done. I’m not so impressed with our place but I am honoured to hear this. I try to stay true to what I am and look at myself as another soul possessed by Black Metal and Satan instead of being a fucking rockstar with an attitude. It still bothers me how bands abandon the “underground” scene when they get more reputation and fame. This is something I hope I stood against and it should show. I don’t think the new “fan” to this music is less worthy than any diehard fan, it all depends on what your devotion is.

What would you say is the key that has enabled you to continue for this long together as a band? You must all have a common goal you would like to reach to make you stick with it for so long? What is it you want to achieve?

I am still hungry to create better and better music, to seek within myself and find more to bring forth. As long as this can be done and be satisfied Horna will carry on. I think it’s safe to say that it’s all about me, what I see and reach for. Other members have changed in the band since the first days. Despite that, Horna still exists and will exist for some time. Although, I know already I will not search for any new members if the current unholy core trinity of myself-Corvus-Saturnus is broken. After that there will be no point left to keep Horna alive.

Horna have always been a very productive band in terms of how many albums you release and the short space of time between them. What spurs this endless creative drive that you have as a band?

I think it’s just a matter of consequences. Most of the time we record songs which were written 2 to 3 years earlier because there was never a chance to record them. If we ever catch up to what we compose currently it would be near a miracle… We try to reach this point however, no matter how far it always gets. It is impossible to stop the creative impulse once it begins to manifest through. I believe also that if you process even the worst ideas which come to mind, it will always give room for another idea to take shape eventually. Everything must get out before there is no room for more.

Your latest release, the fantastic ‘Ääniä Yössä’ is a devastating assault to launch into the black metal world in 2006 featuring music that both looks back to the past and future of Horna’s existence. Still maintaining that awesome rawness and aggressiveness that has permeated your work throughout the years, there is a much more obvious melodic side to the writing this time around, something that has been gradually introduced to the Horna sound over the years. Do you agree with this? Why did you decide to take this angle when composing the material?

Well, I think the melodies have been present since the very first songs I have made. It is just something which fits within our music, to give contrast and create atmosphere. We have paid more attention on the atmosphere than usual with this album and it has been the most inspiring creation for ourselves so far. “Ääniä Yössä” has both become a successful experiment as well as a key path to future of our existence. However, I can’t say we’d abandon our roots at all, nobody knows what the future will bring, not even myself.

Aside from the above, what are the biggest differences in sound and how you approached the song writing on ‘Ääniä Yössä’ compared to your previous releases?

If my research serves me correctly, ‘Ääniä Yössä’ is a concept album based on the black death. Am I correct? In what way is it represented through your lyrics and music? What is it that interested you in this topic in the first place?
…as you also have correctly found out. For musical part we chose to focus on a darker and more sinister mood than previously, to create something more hypnotic and mesmerizing without losing the edge. Most of the lyrics this time were written by Corvus and are his visions of the black death, given the insight of a satanic soul.

The production on ‘Ääniä Yössä’ is as typically raw as we have come to expect from Horna. Why do you choose this type of production for Horna releases? Is it solely to maintain that true underground ethic? Do you ever feel that your music would suit the more polished sound?
We have tried to make a more “professional” sounding album when doing “Sudentaival” but personally I was so enormously disappointed by the sound of it I will not take Horna back to such a studio ever again. I started learning how to record everything on my own and finally ended up with analogue trackers. I simply love the sound I can get with analogue and doing it all myself is easy enough, specially to maintain the vision all through the process. The rawer production is something I feel most personal for the band.

Finland has always been a breeding ground for some of the most devastating artists in the black metal scene, with new and exciting bands cropping up almost on a daily basis. What is it about Finland specifically that enables it to spawn so many BM bands? What the fuck do you guys put in the water over there?
The environment, mentality – I could’t really say. I would imagine it has all to do with the depressive winters and darkness for one thing… and here we have one of the highest suicide rates in the world too. I don’t honestly know how it turned out this way but I would bet on the mentality of people here.

Horna have always maintained the true BM aesthetic of corpse-paint, spikes, inverted crosses, pentagrams etc. What does it mean to you to keep the traditional spirit alive and burning? A lot of bands use it as a kind of mask, to slip into a different personality when on stage. Is this the case for you?
I still believe it’s essential for Black Metal to veil the band with a sinister, obscure and evil face. Without it the band looks like any other band there is. That’s not necessary a bad thing, everyone should do what they honestly feel they want to do. Black Metal is not music just for the show or for shock values. When we go on stage we go to unleash pure black energy and if the audience is with us, we will give them all we have, join in a black mass of praise.

Most of the members in Horna play in different bands such as the mighty Sargeist, Sotajumala, Korgonthurus, Obscurant etc. Do you find it hard to juggle between bands? Do you find you place one as more important than the other?
I think I speak for everyone when I say that the most important band is the one being currently active. Of course, he who creates music for the band should find it important obviously, otherwise there would be no point to carry on with it anymore. So far there has been no problems at all with finding time for everything, on the contrary almost.

I have yet to witness a Horna live performance but after reading many fantastic reviews of a typical Horna concert, it sounds like something very special indeed. What does playing live mean to you as a band? How would you describe a Horna live experience? Is it purely something to get your music across to a wider audience or for more ritualistic purposes?
To be honest, we don’t care if it brings our music to more people. If it happens so, then it happens on it’s own terms. We also don’t care if we play perfect or make mistakes, we are going on stage to share energy and passion. It could be called a ritual of a kind, something to purify the mind with, to rage and ravage. Playing live means exactly what it should, playing LIVE instead of trying to sound slick and follow the albums.

Getting back to ‘Ääniä Yössä’, did the album turn out how you had envisioned when composing? Is it hard to get the right atmosphere in the studio for creating such dark and atmospheric music?
“Ääniä Yössä” turned out almost perfectly as we wanted. The only thing we considered of doing was to re-record the songs in one session but that would’ve only destroyed the original atmosphere. This album took more than 2 years to finally get ready so it wasn’t like going go studio and getting it done with. We used our time and recorded when the mood was already there. Since I have my personal studio it was not a question of time nor money either. That is how we are creating music most of the time anyway – in the heat of the moment.

Do you feel that with this album you achieved what you set out to achieve in terms of your point across and what you based the album on lyrically?
Absolutely. For once the album turned out as planned, from the first note to the last, from the cover arts to everything else. That is why I have still the feeling it has been the most inspiring recording we made so far. I am curious what will happen next…”

Finally, an obvious one but where do you see Horna heading in the future? What do you feel is yet to be covered by the band musically and can we expect any new surprises?
I think next we will combine the speed and atmosphere, creating something obscure, cold, distant and still raw like before. Tides turn. We have still plenty of older material left to be recorded so who knows what happens, only time will tell. We live in the heat of the moment.