Besides Nachtwraak also Helleruin hails from The Netherlands and is familiar with the fine art of Black Metal. Although The Netherlands is my home country, I consider it pure coincidence that the Dutch bands are featured plenty on the pages of VM-Underground. But then again…who’s gonna stop me? Helleruin is a one-man project from an early-twenties bloke who already had a lot of experience throughout the last couple of years. As I was impressed by his first demo, I fired some questions at Carchost (Ricardo)

Let’s talk about Helleruin…
I created Helleruin because I wanted a band/project which features myself on every instrument and vocals, I’ve been in group songwriting a lot with other bands and I realized I’m more comfortable writing music on my own and giving it completely my vision, rather than compromise because of input from others. Helleruin was created in december 2015. Helleruin is an almost forgotten old Dutch word, which modernly could be translated as “witchcraft” or “necromancy”. I choose this because it fits the image I want to radiate.

You’re quite young, but you already have played or still playing in a lot of bands/projects, being involved as a live musician, bandmember or a project of your own. Standvast, Gheestenland, Ethraid Engrin to name a few. Care to walk us through your musical path you have taken since 2014?
Apart from playing live, we released a promotional demo with my band Ethraid Engrin in 2014, which I play drums on. In early 2016, a doom project of mine called Locus Amoenus released it’s debut on tape and recently on CD as well, I play drums and bass on that record. Early October 2016 Orewoet also released it’s first EP, which I also play drums on. I started as a live member for Gheestenland in 2014 and at the beginning of 2016 I started as a live member for Standvast.

Your demo is released in the autumn of 2016. What can the readers expect of your demo? Do you agree the opening of the first track as quite a Punk vibe going on? I mentioned I hear some Taake in your music, do you agree or do you hear other influences?
People can expect harsh, “in your face” melodies and bombastic drums, primitive vocals and quite some aggression. I think you can definitely hear punk vibes in certain parts of my music, especially the first track indeed. The reason for this is that I’m experimenting a lot with different genres in general, I think the music benefits a lot from this. But my main source of influences come from the Norwegian black metal scene mid/late 90’s, and Taake also comes from that scene indeed. 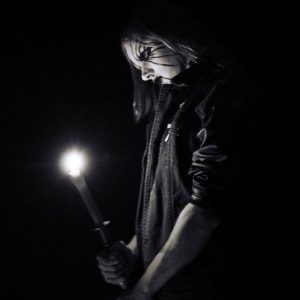 The lyrical content seems to be about war. Does certain books, historical events or movies influence you, or is it just a simple fiction that comes up when composing the music? Why have you chosen to use the Dutch as well as the English language for your lyrics? For future releases, will you keep it this way or will you shift to one of the languages?
The demo was mostly about World War one and two, but that was just the demo. The next release will have another topic. I write lyrics in a way that feels natural for the song, and sometimes Dutch feels more natural than English, and sometimes English feels more natural than Dutch. I don’t know if I will shift to one of the languages, it has to feel natural at that time. So time will tell I guess.

Now you have the demo released, what are the plans? Seeking for a label to spread the word and music of Helleruin? Playing live with session musicians? Or something else? Already ideas for an EP, split or second demo?
For future releases I will look for a label. I don’t feel like Helleruin is a name ready to enter the stage yet, but I like the idea of standing on a stage with Helleruin one day. Futhermore, I’ve recently finished recording songs for a split which will be the forthcoming release and I will record a full length album in spring 2017.

That’s all for now, thanks for introducing Helleruin to us…
You’re welcome, thanks for the interview.