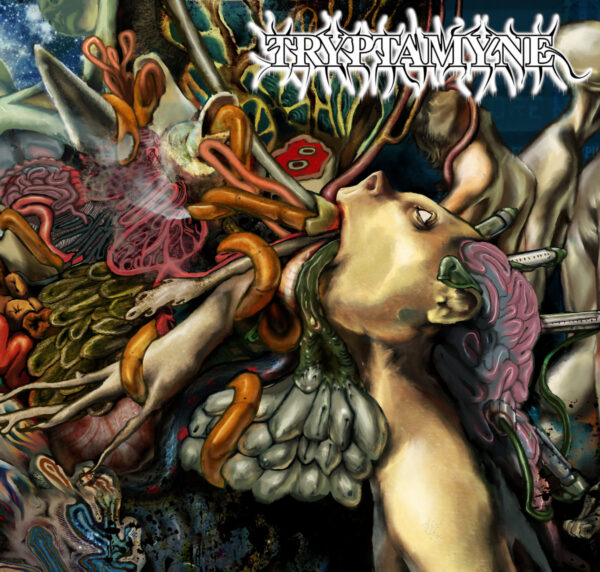 With the madness that is March, we have a ton of stuff going on with College Basketball, start of baseball and the start of Vargheist Records. With that start brings us to the madness that is Tryptamyne and the absolute anxiety inducing, guitar shredding, most weird vocals performance that we’ve seen thus far in 2019. I mean none of that in a bad way.

Take the babies of technical Death/Grind/Avant-garde/Progressive and throw them into a blender until fine and then microwave the bloody paste and you’ll get this self-titled EP by these insanely talented Californians.

From the start you are thrown in to the depths of madness of, “Supplicants” with in your face screams and not just one, it sounds like 10 people are screaming at you and the adrenaline starts to make your heart pound, as the song progresses about 15 seconds we get into the most interesting part about these guys and thats the Avant-Garde/progressive element they bring to the table with some clean singing and almost fusion like playing on the guitars and then finishes out the song with putrid screams from the belly of satan.

Moving on to the more horror inducing songs, “Heteroskedasticity” starts with that progressive element and immediately moves on to the grindiness, with shrieks that sound like Leatherface’s basement throughout the song this is bound to give you goosebumps especially in the dark alone.

The next 2 songs, “Learn” and “Unlearn” take you on a journey through space and time with the clean singing and harmonies to compliment. Learn is actually mostly clean stuff on the progressive/jazz spectrum that is a really nice break in between the insanity. Unlearn is the exact opposite with 5:47 of just sheer grind shredding, Although some passages run along with, “Learn” which makes the concept of the songs just that much better.

Overall this rips hard! It’s a lot to digest in such a short amount of time but I think that makes it so unique in a way that we just don’t see often in this type of extreme music. Very refreshing stuff and it isn’t so over the top that you just get bored with your ears bleeding. Well I mean your ears will bleed but you’ll at least enjoy it! (JonG)