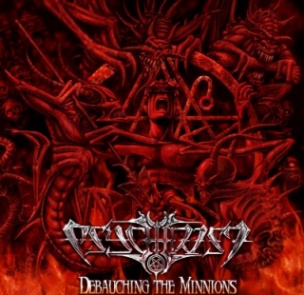 Yes! Yes! YES! It’s always great to hear that a band have improved themselves. I was the lucky guy to review Psychrist’s previous album “Embrace rapture in disgust”. That was an album containing some excellent Australian death metal, infected with furious black.

On this new album “Debauching the minions”, the black metal influences have only grown more in the music, ramifying like a cancerous organism. More black metal has caused Psychrist to sound even more furious. They can now easily take the challenge of compatriots like Abominator and Razor of Occam. My favourite track is actually the second (Depraved Humanity). The combination of whirling black metal guitars and hard-to-follow death metal guitarparts, overscreamed by furious vocals, is one that always does the trick for me. The other songs are almost of the same high level, and songs like “Haven of betrayal” and “Godfucked” all deserve to be mentioned in this review.

The sound is the element that delivers the extra touch to this album. It was done by men not entirely unknown in today’s metal scene: Lachlan (Nazxul) and Astennu (ex-Dimmu Borgir). Now I must admit that when it comes to Australian extreme metal, I am not entirely unbiased, but this is definitely an album I’d recommend to any underground banger. Psychrist rules!!! (Stijn)