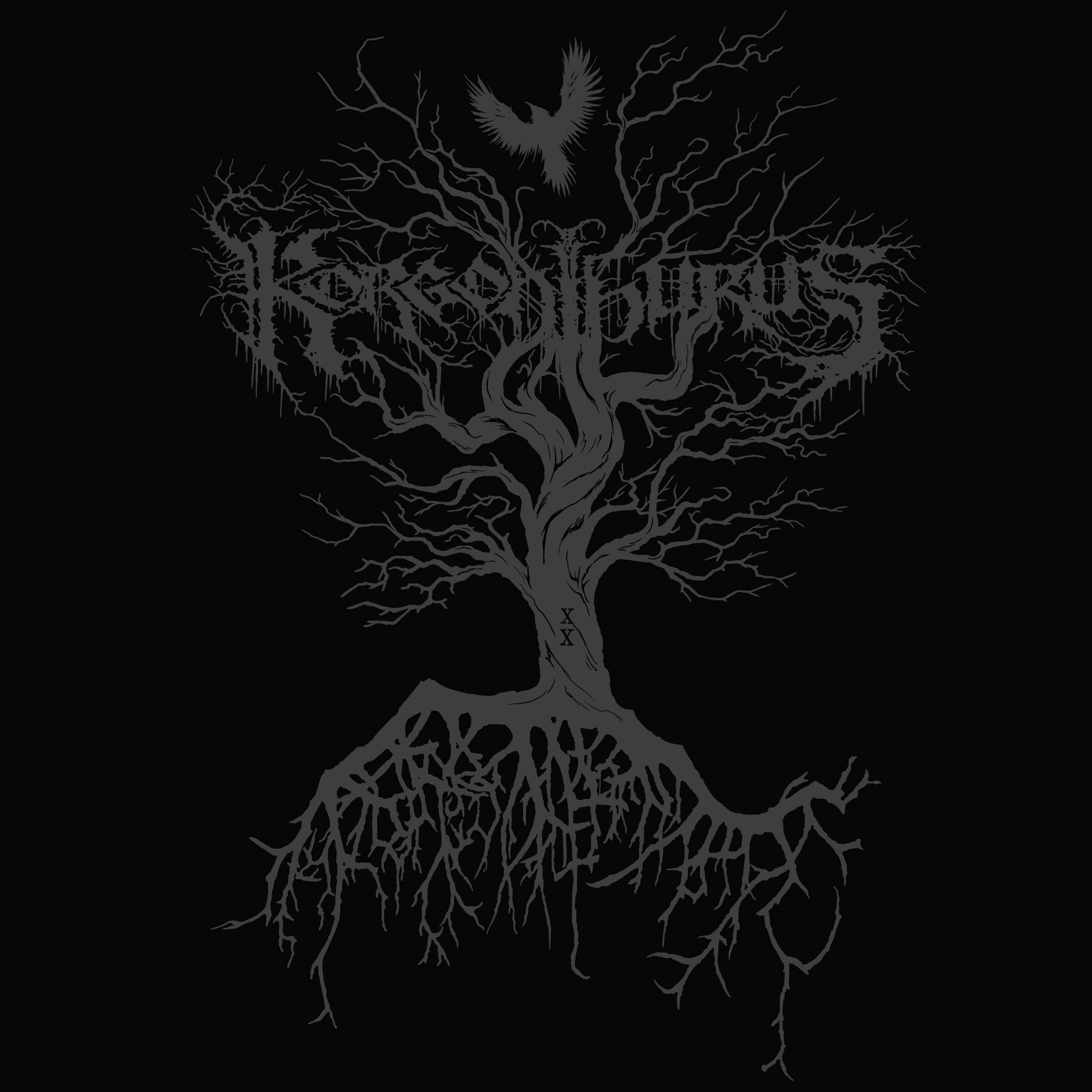 The origin of Korgonthurus goes back to 2000, with the band releasing two demos before splitting up in 2001. It wouldn’t take long before the two core band members, Kryth (drums and guitars) and Corvus (guitars and vocals), restarted the band in 2002, but in the meantime their demo material had also drawn the attention of Horna mastermind Shatraug. Corvus ended up joining Horna and between 2002 to 2009 contributed to 23 of their recordings. These included several classic Horna full-length albums, including ‘Envaatnags Eflos Solf Esgantaavne’, the record that would form the basis of the typical Horna sound, as well as the repetitive atmospheric Black Metal masterpiece ‘Ääniä Yössä’. During all these years, Korgonthurus didn’t exactly sit still and released a couple of EP’s and a split with Silberbach, but the first full-length album wasn’t released until 2009. Baptized ‘Marras’, the debut Korgonthurus album consisted of two lengthy minimalistic bonechilling tracks. They had created an impressive Finnish portrayal of Burzum-inspired depressive and atmospheric Black Metal.

In the years that followed the band mostly released split EP’s, until the release of the second album ‘Vuohen Siunaus’ in 2016. The album turned out different from the predecessor in a lot of ways: the sound was heavier and more up tempo, Corvus employed a good bit of growls in addition to this trademark screams and most of all, the long-spun tracks had been traded in with more compact songs at the cost of the atmosphere of the debut. In retrospect, ‘Vuohen Siunaus’ probably deserves to get a bit more credit than it has gotten, as it’s not that different from a lot of their material on EP’s. Regardless, issues with the line-up caused the band to split up once again, but it took Kryth and Corvus less than a year to reform with a lineup that has now been stable since 2019. This ultimately resulted in the 2020 album ‘Kuolleestasyntynyt’, which turned out to be a fantastic return to form for the band. Although stylistically not that much like ‘Marras’, the overall feeling is much more similar, balancing raw aggression with catchiness, groove and great atmosphere.

To commemorate the 20th anniversary of the band, Woodcut Records has released an EP fittingly titled ‘XX’. The EP features an intro and three new tracks and is available on CD and vinyl. After an initial intro filled with guitar feedback and voice samples, ‘Demonipaimen’ opens the EP with a midpaced riff. Corvus then brings back the growl from ‘Vuohen Siunaus’ one more time before mostly sticking to his trademark raspy Black Metal vocals on the rest of the recording. This track, and in fact all of the songs on ‘XX’ are much more old school Black Metal with a strong emphasis on groove over melody or atmosphere. The subsequent ‘Sieluja Saatanalle’ may be the longest track at nearly seven minutes, but it actually contains the most variation between faster sections, groovier parts and a slowly dragging ending. This song is easily one of the highlights of the EP, along with another fantastic vocal performance that shows just why Corvus is such a praised Black Metal vocalist. By the time the final notes of ‘Kahlittu Huora Jumalan’ call forth the end of the EP it’s clear that this EP is once again a slightly different form of Korgonthurus. It’s a style the band handles effortlessly, although perhaps not exactly what people expect from the band.

When it comes to Korgonthurus, I will put ‘Marras’ or ‘Kuolleestasyntynyt’ on the player any time before choosing ‘XX’. This is a good EP, but not necessarily one that’s a showcase of what makes the band great. However, the material is catchy and performed with skill and insatiable fans of Finnish Black Metal are undoubtedly pleased to add this to their collection. Plus, any material with Corvus on vocals is a treat for those that worship Black Metal. (VincentP)