Katafalk – Storm of the Horde 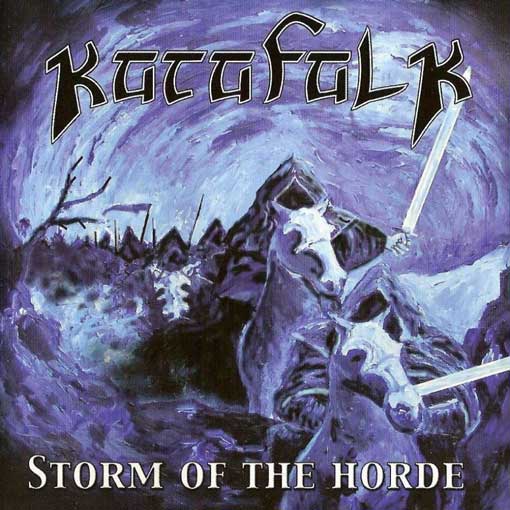 Sharp riffs attack your eardrums and abour every note, apart from some melodic guitarlines here and there, are of an agressive and/or violent nature. The music itself is varied and it seems that the band pulled out all of it’s qualities and unleashed them upon this release. Furiously they play their music like their life is depending on it. All songs are built up pretty well practically all songs they put something catchy, something that sticks in your mind, like for instance (and immediately their most important weapon) the chorusses, melodic passages, solo’s, things lke that. This is pretty cool but also make the songs sound alike on certain levels, and not alike-alike as in boring repetitive music, but more in coherence. For instance the before-mentioned ‘catchyness’ but also some songstructures are repeated clearly hearble. This ain’t exactly a negative point, it was just something that I noticed.

The 13 songs on “Storm Of The Horde” all sound pretty cool and are all played with a lot of conviction and are all tight and powerful. Though I like this release because of it’s quality I have to point out that I would have given the drums a more powerful sound and that next time I’d put in a little more diversity but apart from these (minor) comments I’d say that Katafalk succeeded in writing a good debut album that will appeal to basically all fans of extreme ‘n furious death metal with blackened traces! Yet another Dutch band that releases a good debut death metal album! (DannyB)