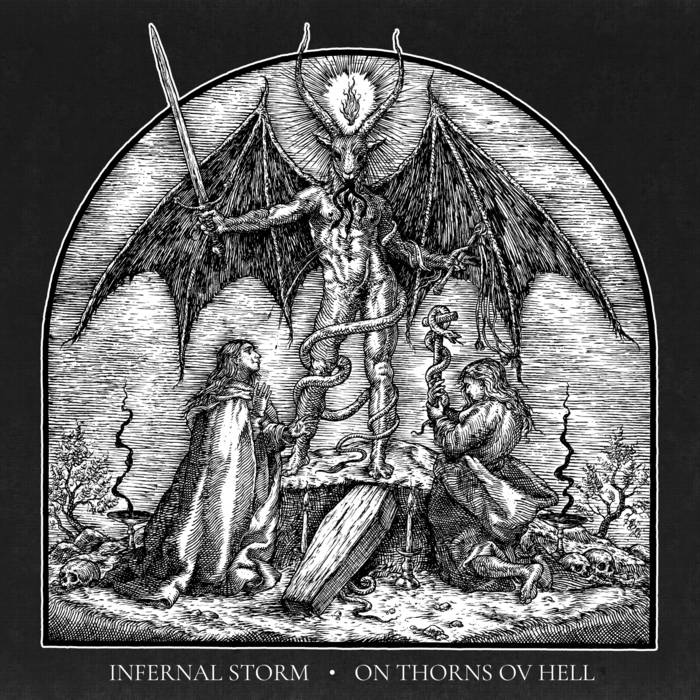 ‘Less is more’, this is a statement that holds true when referring to Greek Atmospheric Black Metal outfit, Infernal Storm with their debut EP, ‘On Thorns Ov Hell’.

It’s understandable to a certain extent to recognize why casual listeners may gloss over this morsel, hell, some might even compare it to a crumb…well, from my listening experience, I would rather not the full course that may leave one feeling lethargic but prefer this fragment in which one can say they tasted greatness even in the smallest grain.

The EP comprises of three tracks clocking in around nine minutes whereby two of the tracks are full on ambient/instrumental, this may dissuade listeners from exploring the tracks due to the lack of content, however I implore you to shift that perspective and view it as band who offers a mini EP consisting of two spirits, one being the ambient tracks and the other being the vocal content and in summary for what the EP provides it feels like an offspring in which the listener can observe while it grows eventually into a full length release.

The track, ‘Last Moment’, evokes a somber yet ominous vibe with an underlying tone of beauty, it conjures the imagery of one who is surrounded by a citadel of green as eyes drink upon the panoramic unsullied landscape as the last wisps of air that tether one to life slowly breaks and escapes the body. While the third track, ’Threnos’ employs the use of both ambient keys and riffing to create a transcendental yet cosmic aura, not so much eerie but the best way to describe it is that it feels ceremonial in tone, as though you are being slowly baptized into the sea of fire that burns not while the flesh becomes anointed with sulphur.

‘On Thorns Ov Hell’ a track that closes in around three minutes, is the perfect specimen to showcase the musical prowess of this band with the enchanting tones exuded by the acoustic picking at intro, while the tremolo picking swells in various sections to a crescendo with the backing ambience draping the overall sound accompanied by the artillery style drumming. A huge positive is the way the atmospheric moments such as the background choir vocalization are blended into the overall structure as one element never dominates the other or tips the scales to favor another component. The vocals that commands the forces gives the vibe of a titan whose mere words can render monuments deconsecrated.

I don’t usually mention the artwork in reviews, however, this one in particular I found rather interesting, created by Manuel Scapinello, the art features a central horned figure revered by two disciples in a majestic way, and this can always be a double edged sword, as it can be quite simple to make this into a somewhat ‘cheesy’ yet forced piece of art that tries to push the boundary for the sake of invoking a response. However, the art, in my personal opinion never comes off as any of that, instead with the subtle lines of shading and the use of black and white, it feels like a historical painting, ancient in nature. It also acts as a positive towards this EP as it binds everything into a presentable package.

Maybe, I went a tad bit overboard with an EP that just contains three songs, but I believe that each track displays a pristine amount of quality in which they form a mighty pillar for in which the band can construct their obelisk whenever the time may come. (Justin Joseph)