Impiety – Versus All Gods 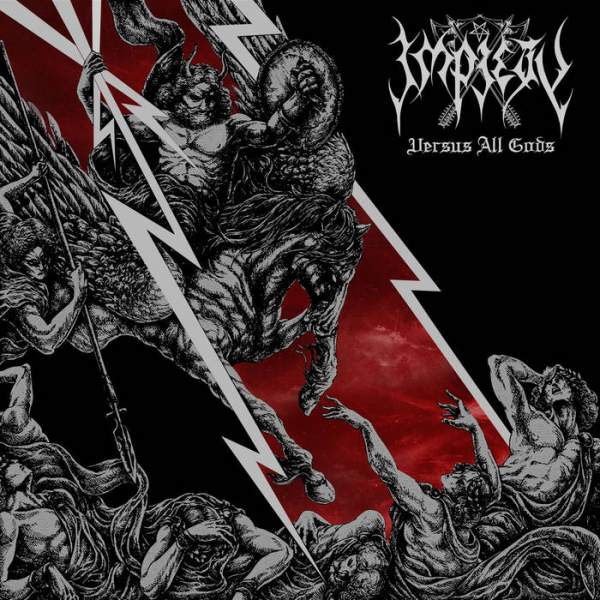 Seven years. Seven long years we had to wait since the release of the – in all honesty, somewhat disappointing – last album of these Singapore savages, the 2012 “Ravage & Conquer”. There has been a smattering of splits, compilations and videos through the years, and the “Impious Crusade” EP, but that one’s from 2013 as well. So it was about time for a new album, highly anticipated by myself after Impiety’s main man Shyaithan showed a sign of life in early 2019 by releasing the EP “Slay For Satan” with side project Devouror, which also featured Impiety drummer Dizazter. I thoroughly enjoyed that EP, a gem of unpolished Black/Death, that proved Shyaithan still meant business.

And here we are now, with a brand spanking new Impiety album. “Versus All Gods” is immediately recognizable with the band’s typical furious mixture of frenzied Black, Death and Thrash Metal. The band showcases excellent musicianship, with tight riffing and thunderous drums. The brutal and excellent productions places all the musical elements in the right perspective, so despite the chaos in the music, the songs don’t become too messy to fathom. Which is quite an achievement, with the avalanche of riffs in every song. The guitar solos are a positive element on this album, melodic and tasteful, and show that guitarist Iszar is a good addition to the band. Tactical breaks and melodic hooks add the necessary anchorages in the stormy musical sea of Impiety, who mostly prefer to go full throttle.

Instead of listening to the songs separately, I feel that the best way to enjoy this album is experiencing it as a whole, the songs strengthen eachother. The strong riff work and the variation in the drum patterns add plenty of distinctiveness along the way, with the articulate vocals of Shyaithan acting as a guide. The subtle use of a flanger on the guitars at times are an obvious nod to the earlier works of Impiety.

A few fun facts: the album was recorded and mixed in the Hertz Studio in Poland, by accomplished producers the Wiesławski brothers, the keyboard intermezzos on the album were written and performed by Wenceslas Carrieu of Necrowretch, and Makhashanah (Abyssic) added her angelic vocals to the song “Interstellar Deathfuck”.

As a fan since the “Asateerul Awaleen” days in the mid nineties, I’m not only glad to see the return of this magnificent band, but tremendously excited as well to see the band return to form with this colossal piece of stainless metal. (Stijn)