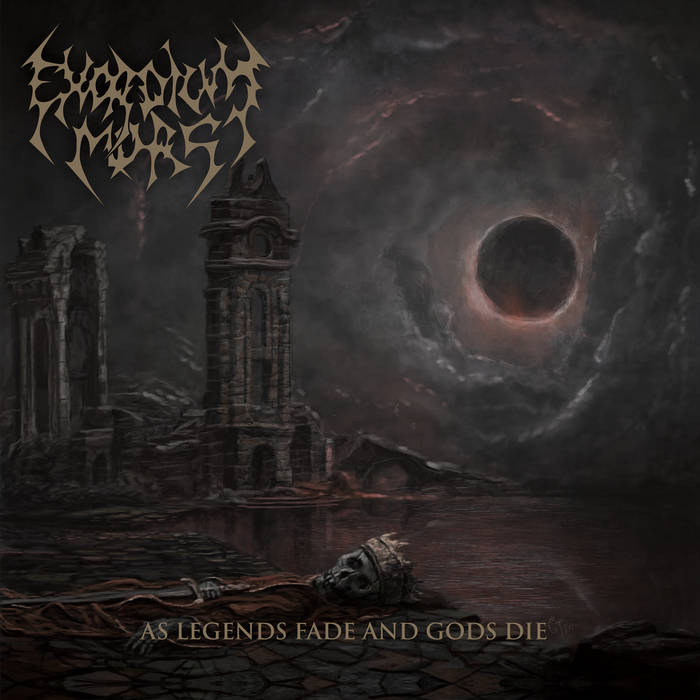 When New Zealand is mentioned many people think of those great mountain landscapes in which Peter Jackson filmed his Lord Of The Rings trilogy. But it also has a small but interesting metal scene. I guess that even the most fanatic metal fans will have trouble even mentioning five bands from the country down there – myself included. But, one of those bands is Exordium Mors, a band that has gone mostly unnoticed, even if the band was already founded in 2004 and released two demos, two EP’s and two full-length albums, of which this ‘As Legends Fade And Gods Die’ is their latest offering.

On their debut album, ‘The Apotheosis Of Death’ (2014, Iron, Blood And Death Corporation) the band suffered from a rather strange production. The album sounded so compressed that you can easily say that it was basically digitally beaten to death right at birth. Yet, with a little effort and perseverance, it was possible to dig out the musical ideas, despite the downright appalling sound. With this new album the band took lessons from the past and they present their work in a crystal clear sound, that makes their music shine brightly. Although I usually prefer the murkier, rawer and muddier sound, Exordium Mors’ blend of Black Metal, Death Metal and Thrash Metal definitely require a clear sound. Just like their great musical example, Absu. It is impossible to write anything about Exordium Mors without mentioning that hugely influential American extreme metal band. Frankly, Exordium Mors is even almost an identical copy. The furious drums, many tempo changes, frantic riffing, wild melodies and violent barking vocal attacks (including high-pitched screams) are all included. I am not entirely sure whether this is an honest musical homage to Absu or just downright copycat behaviour.

However, that is of little importance musically, Exordium Mors brings a musical style that has not been played since Absu itself has died and Proscriptor released a not very uplifting album under a new name. So, anyone who is not overly excited with Proscriptor’s current musical direction, that is getting more and more into hyper speed and inimitable technicalities, might consider switching to these New Zealanders.