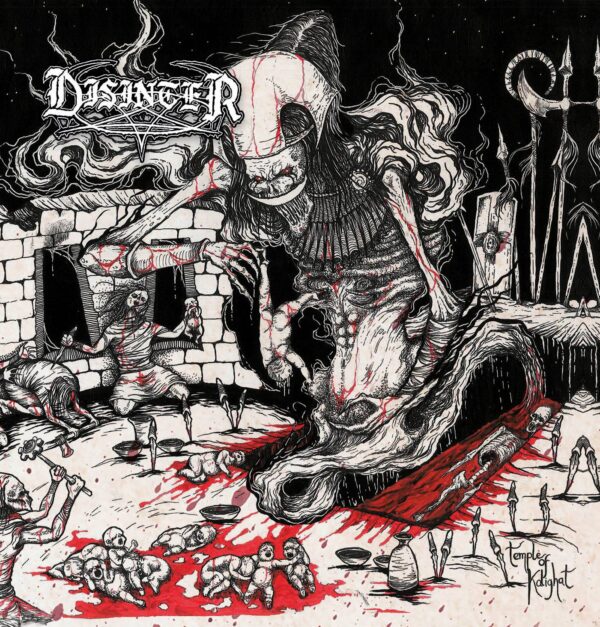 South America has important names in Death Metal, bands that have remained firm in time telling the world that on that side of the planet born true sounds of war and death, with honestly and without mercy. Some productions became necessary references to understand the extreme sound of South America, and these productions continue being listened and maintaining the band names in the underground map. But at the same time, many bands have continued on the road without achieving this scope, although, in all fairness, they deserve it.

Disinter is a Death Metal band on the warpath since 1993. The Peruvians made appearance with two absolutely killing demos, which combined darkness and technique at the right level. These two demos were vital for the band, since they made the band name known in neighboring countries. Later they released their first full length, another demo and a single with very remarkable songs, but that did not have enough repercussion beyond the borders. Maybe they were complicated times, but the band went ahead.

After a period of silence, which was preceded by some lineup changes, the band reappeared in 2016 with its original formation. This was a crucial element, because the chemistry they achieved when they were just beginning their career was back. This return was manifested with a tape of two songs that announced his next album. This material allowed to listen a very mature band, with fresh ideas but without leaving its old formula aside.

Precisely, this is the formula they have replicated perfectly in this new self-titled album, but with more added factors. The style with which Disinter stormed the scene was a rather heavy Death Metal, with blast beats crushing, mid tempos, rather dismal riffs and a singular mortuary aroma. With each production they were adding technique, surprise changes, and complexity in the riffs. Both factors are now nourished by the warlike stench of the South American Metal, although they have been harvesting it for some time now. So there are three pillars that mix here, creating a very particular style, fresh, and that promises to break your neck.

“Maestros invencibles del bronce” is the track with which they start, and which already gives you a hint of the heaviness that will be the album hallmark. The song opens with a very marked chords that go hand in hand with solid drum hits. Subtly harmonization is added to open the way to the mid tempo rhythm, one of the principal characteristic of Disinter. The drums and the bass join forces for achieve the necessary artillery, and the ultra guttural vocals break all with an overwhelming personality. Shortly afterwards, technical intermediates and infernal guitar solos make apparition, destroying the Floyd Rose as Death Metal demand. Below the solos are the melodic lines of the Disinter of yesteryear and others more oriented to the South American Death Metal.

The guitar solos on this album is a very relevant topic. The use of tremolo  Slayer style, but with the dye that added the old South American Metal, is executed masterfully, with solemn darkness and a lot of creativity. It is a delight when the guitar solos parts arrive, by example in “Señores de la Guerra Chimú”, where the lead guitars is very noticeable . Another highlight in this song is the long dark segment that it contains in half. Dense, rotten, and at the same time ceremonial.

“Infierno de arena” is the sixth track and was the song that gave birth to Disinter’s first videoclip. This song we could hear in their EP 2016, as a great announcement of what the band was developing. It is an essential song to understand the proposal of the band. This is because it condenses the essence of this Disinter, of threatening sound, with deaththrash riffs that ride over a robust drum that is mutating towards faster blast beats, but without losing forcefulness.

“Kon” (God of rain and wind in Inca mythology) is possibly the darkest theme of this album. Atypical harmonies, agonizing double kick, total guturalization, minimal acceleration. It is a procession that gives that dismal quota to the album. Almost at the end of the song the guitars surprise with another facet, in which it includes more melodic solos and with notorious inspiration.

Another issue to highlight is the detailed work done in the lyrical aspect. The band bases his stanzas on everything related to the warmongering of the pre-Inca and Inca cultures. Yes, other bands have touched on this topic, but in this particular case the issue has been made not only with brilliant inspiration, but also with knowledge of the subject. Finally is highlighting the graphic work that has brought together three outstanding Peruvian artists who often give pleasant surprises in album covers. We are talking about Katiuzca Guerrero, Alan Corpse and Luis Velásquez, who have managed to capture the concept of Disinter in the best possible way.

This album has been produced in the United States so it can be intuited that it will have a guaranteed distribution that allows the band to take the position they deserve in the Death Metal panorama. Nine intense tracks in digipak presentation. A material highly recommended for the most powerful Death Metal fans. (MarioR)