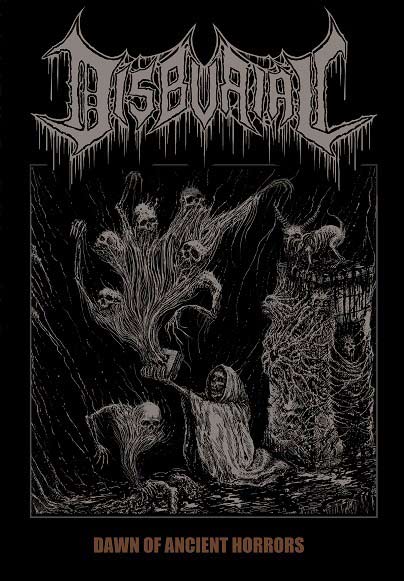 And why wouldn’t you play Old School Death Metal when you’re from Ecuador? Everyone is talkin’ about how good the old scene in Brazil was and how Chile is doing very well at the moment, why not a country which was included in the old Inca Empire and has an history including civil war and massacres and executions by the Spaniards. A perfect soil for Old School Death Metal don’t you think?

And Old School Death Metal you will get! With ominous tools and horror-like experience via discording oblivion, hammering unrest and growling obliteration, created by Rhan-Tegoth, Forever Dead and someone called Dave who seems to be Graveless. So, if you have an unoccupied grave lying around somewhere feel free to contact the “Get Dave a Grave”-foundation and make one undead fella happy! To keep the connection with graves, there are certain people who are having no problem with robbing a grave, and that brings me to Autopsy. Disburial are walkin’ the path Autopsy once made with “Mental Funeral” and “Severed Survival” and are walkin’ the path with pride. You will also hear some Incantation on “Dawn of Ancient Horrors” and well, if those 2 bands aren’t selling points for the savage and murderous ones among us, I don’t what is.