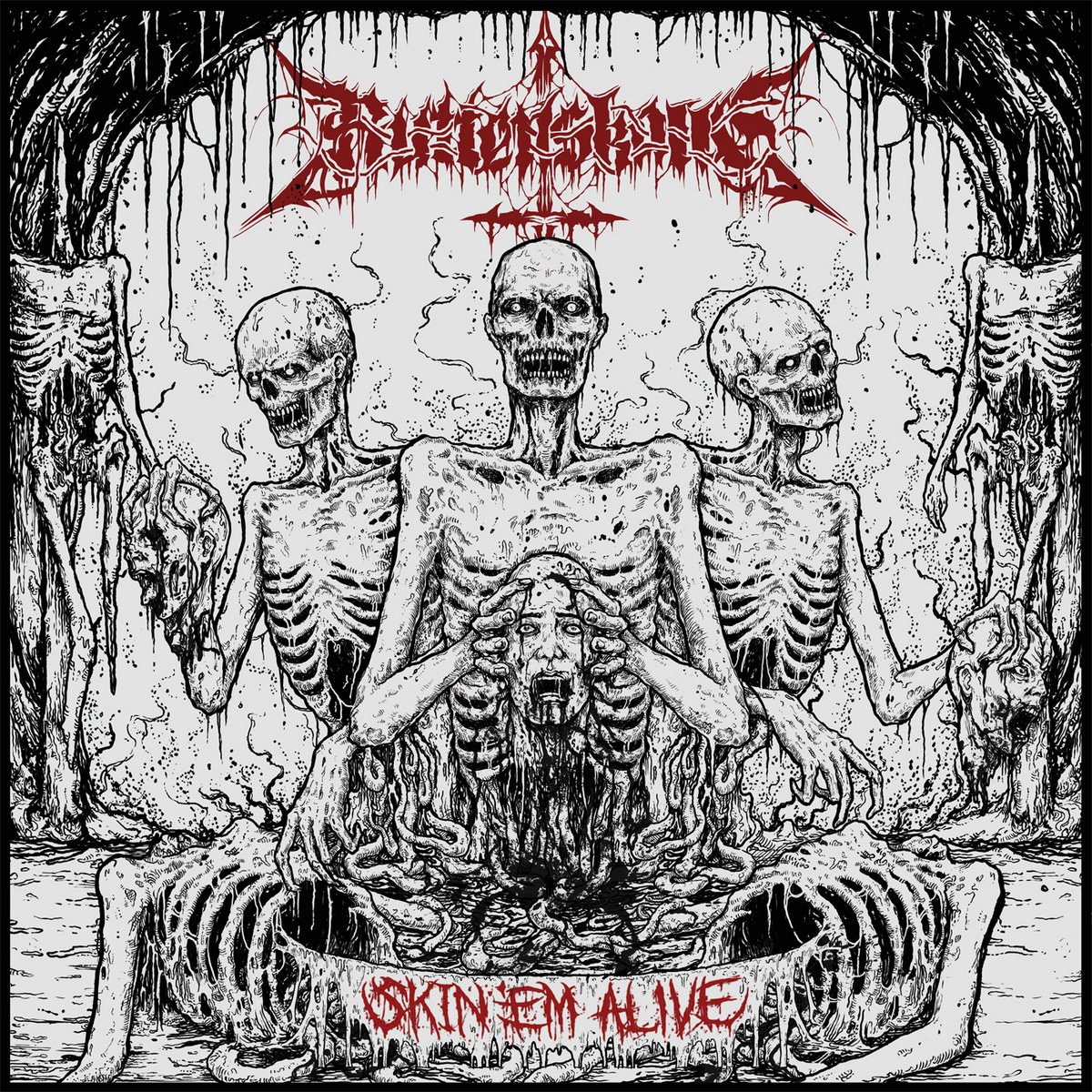 “Skin’em Alive” is the debut album by Ruttenskalle, which is a solo Death Metal project by Paulo Soares. If you are looking for an album that fits the simpler, Old School Death Meath niche with some extra lead work, this is a perfect listen for you.

Starting even from the first few seconds of the album, you get hit with a flashback to the 80s with simplistic, power chord-filled riffs from the guitar. The vocals travel along in time behind the guitars, creating a vocal mixture of early Death (“Mutilation” Demo) and Entombed (“Left Hand Path”). The strength behind Paulo’s vocals is present throughout the song “Carnage In The Fog”, and it is very impressive to hear the grinding sounds he can produce from his vocal cords. Not only do the vocals stay lower in tone, but the riffs also continue the pattern with the droning kick drum. The drums on this record like to resurrect the 80s with a more simple beat than anything complicated, but it certainly fits behind the crushing riffs from the guitars. They allow for simplicity in the writing but do not allow the riff to get stale on one note.

As you drift down the album the mood shifts to a more tonal arrangement from this project. The mood no longer strictly focuses on trashier riffs and tremolo picking, instead, it is replaced with a whole new voice from the guitar. The solos and lead parts manufacture a more sedative and lighter tone to the song that takes you away with a pleasant-sounding melody, then you’re dropped into pulverizing riffs and bone-crushing double kick. On “Buried” specifically, you can hear how the ripping old school riffs mixed with the deep growls compare to the more melodic guitar work with slower drum beats. He can really mix the two styles together seamlessly. Paulo knows how to draw the sound out of the higher notes on his guitar to create a serenade.

A large part of Paulo’s sound as a drummer on this record starts from a proto-blast beat and snaps back into it with slower intricate beats that melt with the voice of the guitars. The diverse set of drum beats is used to allow the more repetitive riffs to remain interesting and fresh. Not only can he blast beat, but he manages to use some D-Beats in there too! It’s amazing to see that he’s able to create these drum beats over his own guitar riffs, he is an absolutely amazing musician.

It’s like he’s able to revive 80’s Death Metal and add more melodies with better productions. One note to add I wish he would add more bass, but for the parts, you could hear it was fantastic. Other than that, in my eyes, it’s as close to a modern old-school-sounding Death Metal masterpiece as you can get. (Phoenex)