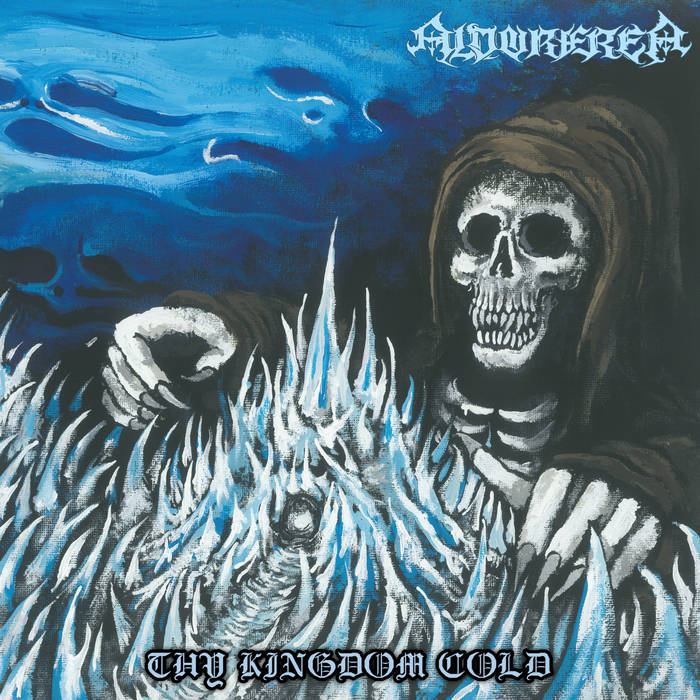 Oh, celebrate this Unholy Force Of Evil with me, you feeble earthlings. After many prayers to the Blizzard Beasts at The Gates Of Blashyrkh we are finally Frozen By Ice Winds again. The triumphant return of Immortal is finally upon us. With ‘Thy Kingdom Cold’ the Norwegian Masters Of Nebulah Frost are finally back to teleport us to their Grim And Frostbitten Kingdoms and to be sure that The Sun No Longer Rises. With this great new album they present what is actually the missing link between ‘Battles In The North’ (1994, Osmose Productions) and ‘Blizzard Beasts’ (1997, Osmose Productions).

This is not Immortal? Are you sure? Really? Oh, damn… this is Aldorfrea, a one-man Black Metal act from the UK. Let me just double-check. Yes, it seems it really is.

But I could have known, if only I had looked a little closer at the artwork. Still, ‘Thy Kingdom Cold’ does sound an awful lot like Immortal at their icy peak. If you close your eyes, it sounds just like you can hear Abbath singing, including the characteristic crackle in his voice. Furthermore, if you listen close enough, you can also hear that Cwellere, the man behind this relatively new band, cannot match the qualities of the Norwegians. Nevertheless, he makes a good attempt to bridge the gap between the extremely fierce ‘Battles In The North’-sound and that of the unique ‘Blizzard Beasts’ album. Okay, he certainly does add some elements of his own that play up a bit more especially towards the second half of the album, especially in the form of more melody guitar leads and atmospheric harmonies than can be heard on those famous Immortal records. With this Cwellere avoids becoming too much of an Immortal clone. The album lasts a good 50 minutes, which asks a lot of the listener’s focus, and it has some difficulty in keeping you interested from beginning to end.

All in all, ‘Thy Kingdom Cold’ is not a bad experience at all and it offers a number of starting points to further develop his sound and it has certainly aroused my curiosity for future work.