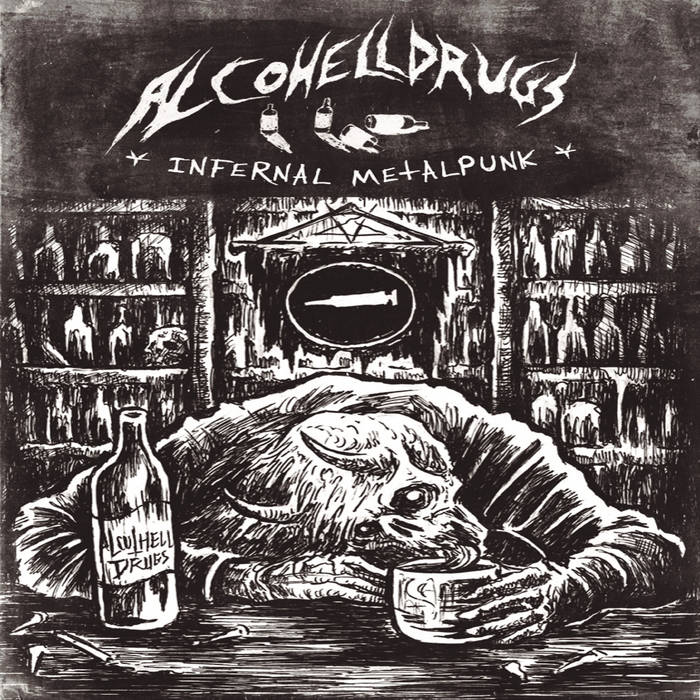 Murder Records announced the latest offering from Alcohelldrugs, a band from the Brazilian northeastern underworld that was formed in 2014 by two drunkards’ maniac brothers. Thiago Xaruto (guitars, vocal) and Henrique Melo (aka Henrique Alcoholic) on the drums. The fanatic brothers are offering a crossover of punk and thrash metal with enough dirtiness to make you possessed with their sound. “Infernal Metal Punk” actually summarizes the band’s discography so far. It includes all of their tracks that have been previously released. So, in the “Infernal Metal Punk” cassette tape you will get the Alcohelldrugs debut release “Never Stop The Madness”, tracks from the band’s second release “Hellish Alcoholic Attack” which was previously released as a split CD with Burial Ground from Russia, and two songs from their “Amoral” split with Thrashera from Rio de Janeiro, Brazil. All of these songs have been previously released on CD by Resistencia Underground Distro & Prod from Brazil. Although, in “Infernal Metal Punk” there are songs included coming from different releases and recordings, there are also different productions as well, but Alcohelldrugs style is always existing.

This is because. Alcohelldrugs have a provoking way to use the guitar; drums got a gnarly bass-toned snare, and the vocals have all the early thrash and black metal mania. Also, the raw and unpolished production is an asset for the band’s style. As evident in “Route 666”, which sounds perverse, dirty, and alcoholic, like an infernal attack on your sanity. You will be wondering how the vocal keeps his throat alive, as it was put through some tormenting tests. So is in the other tracks like, “Self-Destruction”, “Underground Resistance” and “Domination Of Evil”. The punchline like guitar riffs and just the necessary nasty drum beats of “Serial Killer”, “Kill The Poser” and “Alcohelldrugs”, will keep the head n neck moving long after the record ends and will tease you badly on how enticing watching them live could be! The record ends with a super fitting cover of “Bite It You Scum” from the album “You’ll Never Tame Me” (1985) by morbid legend G.G. Allin. The biting guitar tone and bitter raw vocal deliverance gives a fitting nod to this rowdy classic number. G.G. Allin and his perennial influences from New York Dolls, Alice Cooper, and Ramones, would remind anyone of the hard-bitten non-conformist, counter-culture, and anti-establishment ethos established by punk’s most notorious icon at the pinnacle of its movements. So, obvious fist to the band, for reminding the legend who would certainly kill-instead-of-beat more in one of his concerts in the current era.

“Infernal Metal Punk” is limited to 150 hand-numbered copies of orange cassette tape. The release is completed with a two-sided glossy paper poster with pleasant photos of the band, plus an A4 lyric sheet with additional info, contacts, and the band’s biography! For all fans and followers of raw punk and metal debauchery, this record is recommended for getting countless spins and your possession with Alcohelldrugs is a must, afterward.