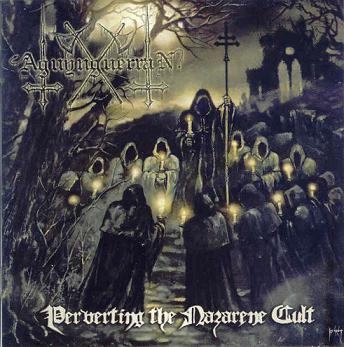 The other songs bring Aguynguerran’s known style of traditional fast and thrashy black metal (including sharp vocals). The link with other Belgian bands is inevitable – There quite some Iconoclasm and Enthroned going on here. Personally I like the mid-tempo parts the most and some different turns (the ending of “Manifest” and the chants in “Oath”) are a pleasant break in this unholy crusade. I wouldn’t say “Perverting the Nazarene Cult” is an outstanding or highly innovating release. Fanatics of straight forward black metal wouldn’t appreciate that either – You know what you get here and that’s just fine. (FilipD)