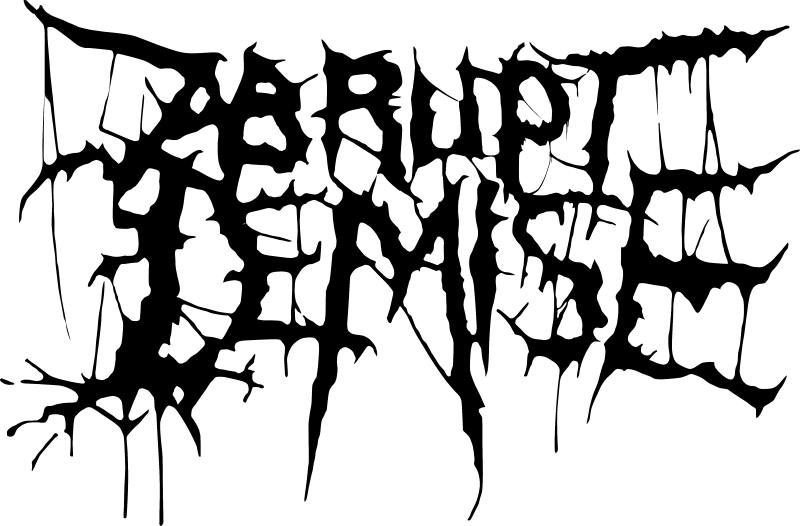 With “The Pleasure to Kill and Grind”, the Dutch murder squad Abrupt Demise created one bloodletting debut album released by Raw Skull Recordz, or as our own The Great Mackintosh describes it as “magnificent, unpredictable madness” as well as “You wanna kill some fucker and torture them, here is your soundtrack”. Can’t argue with the insane, can you? Vocalist Marc Ouwendijk was so kind enough to answer a couple of our questions… (Ricardo)

Take us back when it all began…
Well, let’s see. We started way back in 2010, with the remains of Necronomical Crucifixion added with some new volunteers. We had some changes along the way, but we’re in a pretty steady mode at the moment. I’d join the ranks in 2016 after been ask by Rene (singer) who sung in Burning Hatred. I played guitar at that time in Burning Hatred.

We pretty much have all different influence in the band, except for the old school part. We all like old school brutal Death Metal. We just do what we like to do, and see ourselves as a group of friends making music. And if it sound okay, it becomes an Abrupt Demise song, no frames attached.

Looking back, what are your thoughts now on the self-released “Aborted from Life” EP?
We recorded the EP in beginning of 2013 at Dirty Bird Recordings studio with Ferdy Doldersum aka Fredde Kaddeth in Hoogeveen, and still love the EP. We had some very good reviews and gave us the change to do some bigger shows. We did it with a smaller budget than we did “the Pleasure” and obviously you can hear that. “Self Inflicted” was re-recorded again for “The Pleasure”. The Artwork of the EP was done by Patrick Brandsma (guitar player at that time), he was the art-work man of Abrupt Demise and did a good job.

Let’s talk about your latest release; “The Pleasure to Kill and Grind”.
Well, we basically recorded 15 songs and picked the best 10 to make an album. At the end of 2017 we started with the pre-production of the album. After visiting Roelof Klop at the Haverkamp Studio in Zwolle we were very enthusiastic to work with him. A young guy who needs a couple of words to understand what we wanted. So together with Peter Haverkamp they produced and Mastered the album. (except the vinyl master, that was done by Tiago Canadas from Portugal). The drums and the vocals were recorded in the studio, the rest was done at home. All intro’s are composed by Wim Uiterwijk (drummer Herman’s brother). 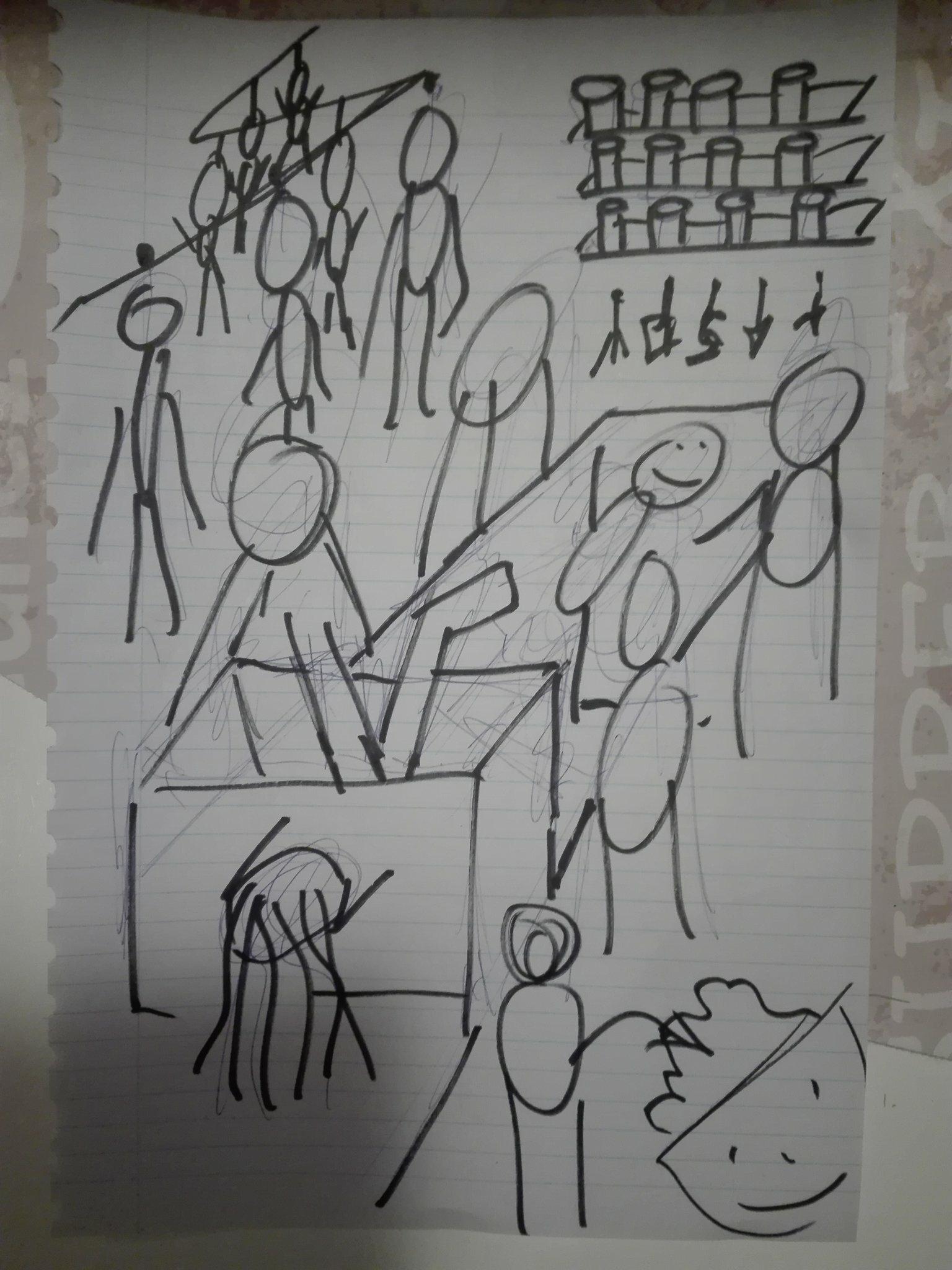 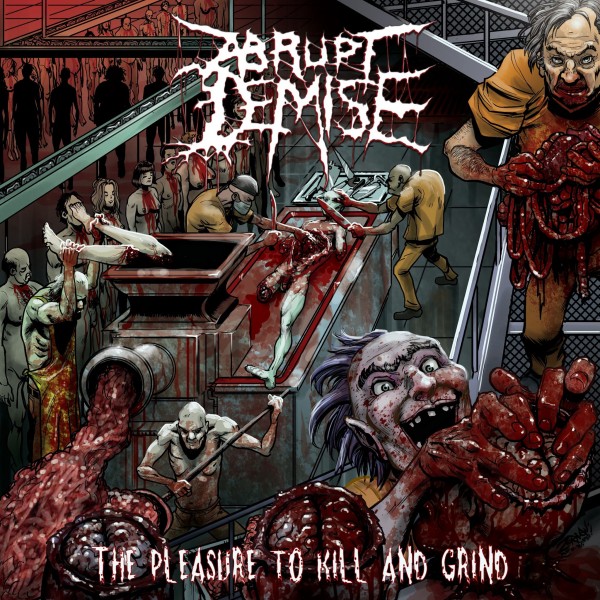 Rene had an idea for the cover, and I already had made contact with Jeff Zornow, a very talented New York Comic artist and illustrator. We send him the sketch I made in our rehearsal room, and believe it or not, he actually made an awesome artwork out of it.

In the summer of 2019 all recordings were ready, and Roelof started mixing and we were all satisfied at the beginning of October. In the meantime Rutger de Vries (De Vriesch Originals) finished the artwork for the CD & LP, and we had the job to find us a label company. Well that didn’t take long, because Rai Wolters from Raw Skull Records was enthusiastic as hell and while on Tour in the US (End of 2019) we signed our record deal with Rai. We had some pretty good response on the album, and overall they gave us a 7 or 8. Mostly heard is, not very innovative but the aggressive sound and the variety in the songs made it a very listenable album. So we are pleased with those reviews!

Most lyrics were written by Patrick Brandsma and Rene Brugmans. There is not a real theme, but songs often goes about Murders and murdering. Death and destruction, that are the things Rene’s screams 😉 Normally it is first the music than the lyrics. That’s our basic way to write new songs.

How did you get in contact with Raw Skull Recordz?
I contacted Rai, and send him a copy of the album, basically when we were in the last phase of mixing. We also send it to some other labels, but Rai was the first one who was excited and offered us right away a deal. We have a deal for one album, and we see what the future us brings. 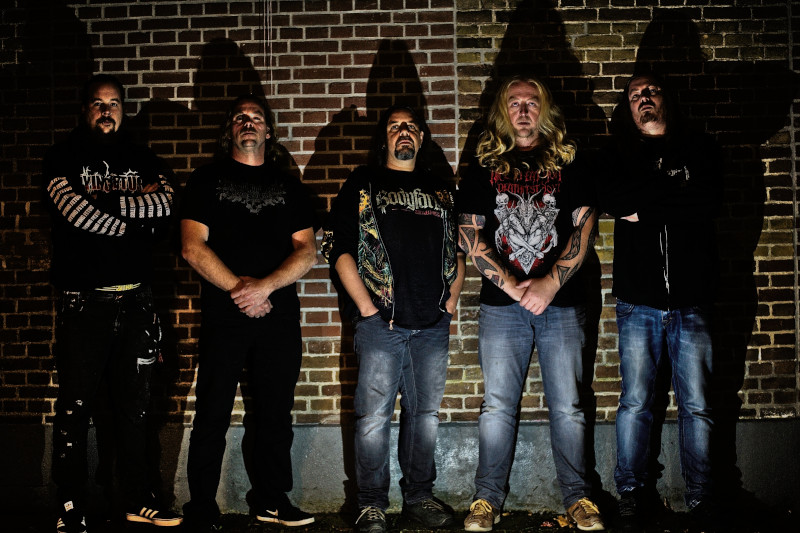 And what about the (near) future of Abrupt Demise? Writing new songs? A new EP as you have some songs left over…?
We have a couple of songs on the shelf, but with corona and stuff we didn’t do much rehearsing lately. We are a rehearsal band, and don’t do a lot at home. So all the things that “happens” happens in the rehearsal room.

For 2020 not much I think. Maybe a show at the end of August, but not sure that will take place. 2021 we shall do the things that were booked for 2020, so we’ll be going to Malta, Austria, Germany, Czech republic and also some shows in the Netherlands (like Stonehenge for example). We’re thinking to do a split album, or maybe an EP.

Some of you are involved with acts like Anarchos, Eternal Solstice, Condolence to name a few. Any news on them to tell our readers?
Herman, Jos & Rene all have one band. Ardy also plays in Anarchos and Rotten Remains (cover band) and he use to play in Eternal Solstice. and I do my own project called Condolence. Condolence was a Dutch death metal band established in 1989 in Bodegraven, did some shows (with Gorefest, Mourning and other bands) but sadly died in 1992. Recorded a demo tape in 1990 with 4 songs, and we had another 6 songs that were never recorded. And I thought that were pretty cool songs, so I started in 2015 recording these songs (with one cover) with the help of my friend Ric Brand on drums (Chiraw, The Heritance) and as producer. At the moment I’m half way the album, but I takes a lot of effort to get things going because it’s a one man thing. So now and then Ric send me a message to hurry up, so it will be there one day!

Are there any bands or albums of your recent playlist you would like to mention?
We’ll I’m 47 now and I must confess I like the tunes from the old days the best. Fuck yeah, I listen often to ’90 death metal, can’t help it. So now and then I discover a newer band on Spotify, like Throne of Heresy. I like the “Antioch” album very much. I recently “discovered” the Monolith Deathcult. Knew them from the beginning “The Apotheoses”, and did know the rest. But the last shit they did was amazing stuff. I listen to them a lot. Igorr is also a thing I ran against on Spotify, cool as hell. Apple car play and Spotify are a great combination in the car, and I drive 60.000 km a year so that’s a lot of new music lately 😉

Before we wrap up this interview, anything I’ve forgotten to mention? Thanks for your time!
Want to thank VM-Underground for their time, and thank you for supporting Abrupt Demise. And then some good ol’ commerce: Check us out on Spotify or buy our shit at: rawskullrecordz.com