Nyctophilia – Darkness Calls upon Me [Re-Release] 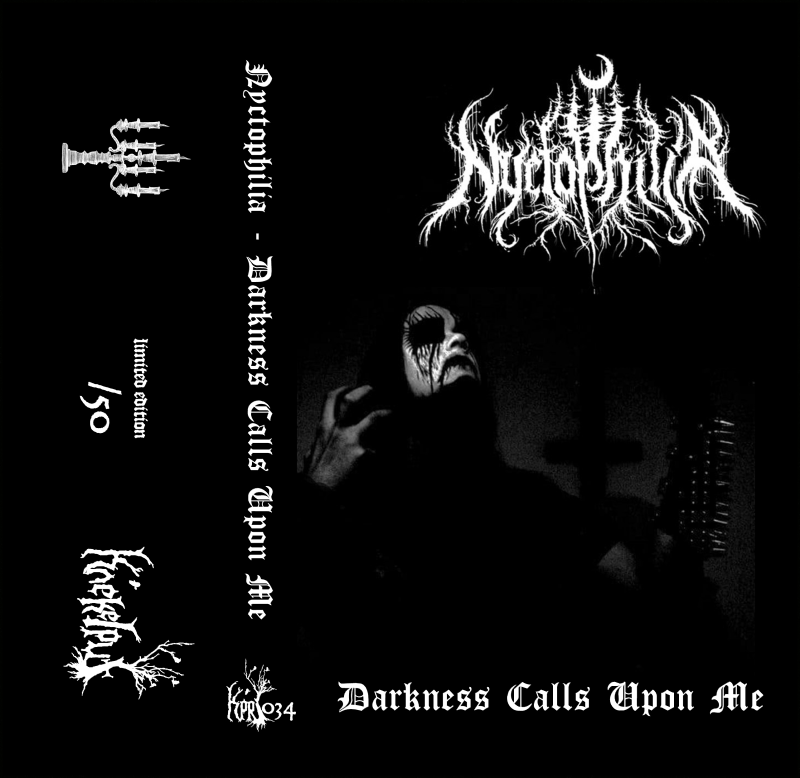 Nyctophilia, the one man band hailing from Poland, operates with a cold, dark, atmospheric style to raw Black Metal. Nyctophilia captured listener’s attention during their debut into the underground scene with “My Cold Journey Through Darkness” (2015). “Darkness Calls Upon Me”, recorded in 2017, offers an uncompromising experience with an overall near death feeling not all Black Metal has the ability to deliver to such an effect.

This full length release features 6 eerie, atmospheric tracks totalling 30 minutes, with songs naturally flowing from one dark, depressive, evil track to the next. The intro melody seems to be playing cold, snow bitten winds through the pipes of a giant organ, cementing an eerie feeling that lasts through the final track. The music has an almost naturalistic quality to it, as if recorded deep in the dominating darkness of a dense forest. Once the music hits and you hear those raspy shrieks, you know you have unveiled something otherworldly.

The title track, “Darkness Calls Upon Me” totals a little over 7 minutes and offers a microcosm into the gloomy, preternatural vibe of the album as a whole. This track also boasts some of the highest caliber vocals in the scene. Pairing that with the simple but effective drum beat, laced with the isolated solo guitar makes this track a definite favorite for its ability to further this feeling of isolation and despair.

“Darkness Calls Upon Me” is an album best enjoyed from beginning to end to fully embrace Nyctophilia’s darkness and one that you don’t want to miss out on. You can purchase the digital album on Nyctophilia’s bandcamp as well as other releases from their fairly extensive discography. If you missed out on the first physical releases of this album, Knekelput re-released it on cassette and let’s keep our fingers crossed for a vinyl release in the near future. (Rob Menze)